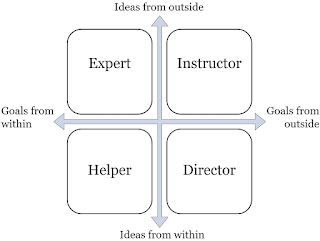 In 2008 I developed the 4 Progress-Focused Roles model (4PR model) together with my colleague Gwenda Schlundt Bodien (with whom I also, 4 years ago, co-developed the progress-focused approach as a whole).

The model describes four different roles from which progress-focused professionals may work: helping, directing, training/advising, and instructing. It is a two-dimensional model which describes these four roles which apply in conversations.

The effectiveness of one's approach is determined to a large degree by whether one uses skills in a way which fits the situation at hand. The 4PR model can help you assess how to best deal with a specific situation as a progress-focused professional. Usually it is best to first consider the horizontal axis and ask yourself: does the conversation revolve around a goal which the individual or team I am talking to have chosen for themselves or around a goal which is given to them (for example by their management)?

In the former case, a good way to approach the situation is via the NOAM-7-Steps approach. In the latter case, if the conversation is about meeting an external goal, it is important to determine whether you are the one who has given the goal to the individual or team or whether you are involved as an external coach. If you are the person who is giving the goal (for instance as a manager) you can use the technique of progress-focused directing. Of you are involved as an external coach you cannot use this technique but what you can do is mention the external goal in your conversation and incorporate into your questions. Examples of such questions are "What is the goal of your manager in sending you to me?" and "How will your manager notice afterwards that this coaching will have been successful?"

In coaching conversations in which there is an external goal clients may have resistance to the goal or to talking to the coach. In such case it can be useful to use the technique of the tilt intervention.

Progress-focused professionals may also frequently operate in the role of an expert. This role applicable when clients specifically give a mandate to the professional to give them explanations, tips, help, and feedback. An example of a situation in which this is happening is during training courses. As a progress-focused trainer you may provide expertise without holding back. What you generally don't do, as a trainer or advisor, is to give goals to your clients. Clients receive your tips and expertise and determine for themselves if and how they will use them.

Instructing, the fourth role, is used when there is an external goal and a prescribed way of operating. This can be necessary when working with people who are relatively inexperienced and in situations in which it is important to work according to a protocol (for example for safety reasons). When giving instructions you may still, as a progress-focused professional, work in an autonomy-supportive and competence-supportive way. One way of doing this is by not starting to give instructions right away but to first check what the person already knows about how to do the task at hand.

An important thing to mention is that in one conversation it is possible to work in different roles. Here are two examples. First, it may be useful during a coaching conversation to switch from a helping role to an expert role. This can be done when you suspect that a client can benefit from specific expertise or feedback. When doing such a shift in role it is best to make this explicit and to ask permission. An example of how you might do this is: "There is a proven approach for this type of situations. Would you like to tell you about this?"