Showing posts from September, 2020
Show all

As parents, we think few things are more important than that our children are doing well. Fortunately, through the way we raise them, we can have a significant impact on their mental health. In order to be able to use that influence properly, it is important to know what works well in parenting. Joussemet et al. (2018) are currently conducting research of which the results are not yet in. Their description of their research is interesting anyway because it provides insight into some key aspects of effective parenting.
Post a Comment
Read full post »

Autonomy support is useful in many contexts such as leadership, teaching, and parenting. Research provides indications that autonomy support by parents contributes to children functioning well, developing well and feeling good. A study by Andreadakis et al. (2019) examines how parents can provide autonomy support to toddlers in situations where toddlers need to do things that are important but not interesting to them, such as cleaning up, taking a bath, washing hands, etc.
1 comment
Read full post »

When Donald Trump was a nominee in 2015/2015 I was very surprised that Trump, despite his apparent incompetence and amorality, appeared to be practically unstoppable. First, he defeated one after the other of his Republican rivals.  Then, he defeated one after the other of opponents within the Republican party establishment. Rivals, who clearly saw Trump for what he was (a liar, a narcissist, a con man, an autocrat) like Nikki Haley , Marco Rubio , Ted Cruz , turned into loyalists.  Many people aware of Trump's autocratic ambitions said that checks and balances would prevent a slide into autocracy. But journalist and author Masha Gessen warned: "Institutions will not save you". What happened next?
2 comments
Read full post »

The problem as the beginning of progress

In the progress-focused approach , a problem is often viewed as the potential beginning of progress. Both individual conversations and team sessions often start with discussing problems, things that are not going well or things that have gone wrong. Having problems is, of course, unpleasant and can lead to dissatisfaction, frustration or even a feeling of powerlessness.
Post a Comment
Read full post »

How teachers' motivation and mindset predicts how they teach

In an email I received the following question: “Do you have any ideas on how to deal with the fact that there is so much psychological knowledge that it is difficult for the typical manager to remember it in the moment, even if they have learned it? I keep leaning towards AI solutions, but that could be technophilia. ” Off the cuff I wrote an answer to his question:
Post a Comment
Read full post »

We must give psychology away

George Miller was one of the founders of cognitive psychology and psycho-linguistics. He reached fame with his article The Magical Number Seven, Plus or Minus Two , in which he showed that the capacity of human short-term memory is limited to the capacity to remember roughly 7 elements. When Miller became president of the American Psychological Association (APA) in 1969, he made a statement that appealed to me.
Post a Comment
Read full post »

I read Michael Cohen's book Disloyal . Here are some quotes from the book and some thoughts about the book and Trump.
Post a Comment
Read full post »

The Social Progress Index (SPI) of 2020 has been published today. The SPI uses non-economic indicators to chart how well countries are doing. Read below how it works in the 163 countries described in the SPI. Overall, is the world continuing to make progress? How is your own doing? Are there certain things that clearly need improvement? Which countries are progressing the fastest? Which countries are actually declining? How is the United States doing in the era of Donald Trump?
Post a Comment
Read full post »

Difficult Conversations: Dealing with the tension between honesty and benevolence 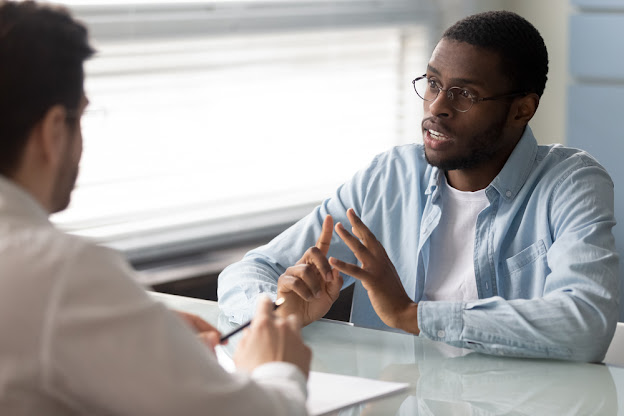 We all have had to have difficult conversations at some point, like conversations where we say no to a request, give negative feedback, or communicate a negative decision or assessment. In these kinds of bad news conversations, people often experience a tension between two moral motivations, namely to be honest and to be benevolent. Emma Levine, Annabelle Roberts, and Taya Cohen explain, in a new paper , that people often make ineffective choices in how to deal with that tension, and they provide practical tips on how to better approach situations like this.
Post a Comment
Read full post »

How do you address each other? A situational communication model

In most professions the quality of work performance depends mainly on human actions. In this human action, not only technical knowledge and skills are important, but also cooperation and communication skills. Collaboration is often important because people are usually responsible for achieving results together. They have to inform each other, support each other, teach each other things and clarify expectations. The situational communication model below can help you determine how to communicate effectively in different situations.
Post a Comment
Read full post »

Four questions to make your feedback as effective as possible

Feedback can be very valuable. Feedback, information about the effects of our behavior, can help us get better at what we do. By definition, we ourselves only have a limited insight into the effects of our actions. Other people look at what we do from a different perspective and can therefore see different things. Moreover, they may have more or different knowledge and skills, so that their feedback can be extra educational for us. Whether these positive effects of feedback are realized depends on what the feedback is about and how effectively the feedback is delivered. Here are some questions to make your feedback as effective as possible.
Post a Comment
Read full post »

A paper by Bryan, Yeager & O'Brien (2019) sheds a new light on the replication crisis in psychology. An image that has emerged here and there of original authors as tinkering cheats and replicators as holy defenders of scientific morality must be revised. Replicators often take too many liberties, both in the design of their research and in the way in which they analyze data.
Post a Comment
Read full post »

How do you react to repeated transgressions of your child?

As parents, we play an important role in how children develop. We have a lot of influence on what they consider important and how they behave. But how we can best fulfill our role as a parent is not always easy to imagine.
Post a Comment
Read full post »

If you had to point out one starting point in the development of self-determination theory , it should probably be Edward Deci's classic research into intrinsic motivation. He published that study in 1971, and it was the first major publication in a large series of publications that would follow from Ed Deci and Richard Ryan and an ever-expanding network of researchers . Here you can read a brief description of that study.
Post a Comment
Read full post »

A recent publication by Walton & Brady (2019) describes 5 principles for reframing negative events. These principles can be applied by the person who has experienced a negative event. But also by others such as, parents, teachers, doctors, managers, and so on.
Post a Comment
Read full post »

How to motivate students? Use a dual process!

The dual process model provides insight into how teachers can support student motivation. Self-determination theory offers important clues for how teachers can improve student motivation. This article provides a summary of these types of interventions. When teachers apply these interventions, students are likely to feel better, become more engaged in lessons and learn and perform better. Jang, Kim & Reeve (2016) show that a two-track approach, or, as they call it, a "dual process model", is needed to achieve this.
1 comment
Read full post »

Growth mindset debunked? Not so much. Simple re-analysis of Li & Bates (2019) shows that Mueller & Dweck (1998) is not debunked, but confirmed

One of the best-known studies in relation to mindsets is the study by Mueller & Dweck (1998) . Here I discuss that article in detail. Li & Bates (2019) recently conducted a replication study by Mueller & Dweck and said they had not found the originally found effects. But in a response to this article, Dweck & Yeager (2019) show that Li & Bates' replication study does not meet the requirements that are currently set for replication studies. Moreover, they show that by correcting for some of the simplest deviations from those requirements, Li & Bates' data does not invalidate Mueller & Dweck's conclusions, but corroborates them.
Post a Comment
Read full post »

One of the most influential papers by Carol Dweck and her colleagues is the Mueller & Dweck (1998) paper entitled Praise for Intelligence Can Undermine Children's Motivation and Performance . Over the years, this study has been criticized or disputed from various quarters, sometimes largely justified , sometimes largely unjustified. Knowing these criticisms, I argue that Mueller & Dweck (1998) is a classic publication that has lost little or nothing of importance. Here you can read a brief description of that research.
Post a Comment
Read full post »
More posts