How we can keep on breaking through performance ceilings 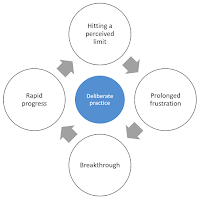 This way of practicing requires a great deal of effort and can be frequently uncomfortable and frustrating. As we start to practice deliberately we usually make rapid progress at the start. After some time, however, we hit a perceived limit. This limit is a level of performance beyond which we can't seem to go, not matter how hard we try. Usually when this happens, we are inclined to stop practicing. We may think we have reached the ceiling of our potential. We may think we lack talent to grow past this limit.

But if we do continue practicing deliberately we notice the following. Due to the frustration which goes with the prolonged lingering at the perceived limit, a pressure starts to grow to come up with creative approaches to break through the limit after all. The brain is forced to adapt to the level of the task and to come up with an approach which does lead to a breakthrough. This pattern can repeat itself again and again. After phases of rapid progress there will be perceived limits and after that there will be breakthroughs.

We can keep on breaking through ceilings

In this video research done by Anders Ericsson is explained which illustrates the process described above. In these studies, a student was trained to remember random strings of digits. At the time these studies were done psychologists believed that people could remember no.t more than about 7 digits which were read to them. The student, Steve Faloon, after some time, indeed, managed to correctly repeat 7 digits. This was a limit which he did not appear to be able to break through. But he kept on practicing. After many hours of practice he suddenly broke through this limit after which he reached a new limit of 22 digits. This process repeated itself again and again.

Nowadays, there are many people who are able to hold several hundred of digits into their working memory thanks to the creative methods they have come up with to break through many performance ceilings.  Surprisingly, Anders Ericsson has not been able to find anyone unable to break through performance limits while using deliberate practice.

How often have we given up when we tried to learn something and kept on failing? How often have we thought that, apparently, we lacked talent for the thing we were trying to learn? How often have thus given up to soon? It is important to start thinking differently about perceived limits. These limits are not an indication of a lack of talent. If we want to master the skill, we must learn to view the frustration of hitting the perceived limit as an inevitable and useful part of getting better.

The idea that learning should be enjoyable at any time is limiting. Effective learning often also has moments of discomfort and frustration. We should not feel sorry for ourselves or for our students or children when they experience frustration and discomfort while learning. Instead, we should realize that these unpleasant feelings play an important role in making progress.
Author: Coert Visser