Countermeasures against the negativity effect 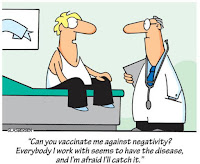 The negativity bias is the phenomenon that we notice negative events more easily, that we are affected more strongly by them, and that we remember them more easily. Although not every individual and every age group is equally vulnerable to the negativity bias it is quite common. For example, Amabile & Kramer (2011), in their study on inner work life, found that the impact of negative events on a work day was two to three times stronger than that of positive work day events.


What we have achieved goes to the background

The negativity effect in work manifests itself in that we automatically focus our attention on problems we need to solve instead of on what we have already accomplished. Everything we have achieved usually quickly disappears into the background. You might say that our progress and successes quickly move to the unconscious parts of out brain due to which we are not aware of them most of the time. We mainly see problems, threats, unfinished tasks and new tasks.

In our work we often observe the consequences of the negativity effect. We see many people working hard and feeling like they are moving from one problem to the next without experiencing much gratification. This can have some negative consequences, not only for individuals but also for teams. Sometimes, I hear people say things like: "Whenever we meet as a team there is a lot of complaining going on. That is so unpleasant that, nowadays, we more or less avoid each other as much as possible. We don't feel like we are a team anymore, not a real team anyway."

Remarks like this are understandable. If you experience your work as a concatenation of problems and you lack a clear view of what you have accomplished, it is understandable that you won't feel very happy and that want to complain. But emotions can be contagious. When team members express themselves negatively there can be a self-reinforcing effect. One person's negativity can easily bring out other people's negativity and before you know it, a dismal atmosphere may arise. This does not help.

It is wise to to take deliberate countermeasures against the negativity effect, both for individuals and teams. As an individual, for example, it may helpful to frequently focus briefly on things that have gone well. You can think about the progress you have made in what is important to you, for example by keeping a progress diary. It is particularly smart to seek out a colleague you like and to tell each other about the progress both of you have made.

Teams can take countermeasures, too. This can be done by thinking carefully about how you structure team meetings and how you communicate in meetings. Here are a few things which can help to think and communicate in progress-focused wat in order to neutralize the negativity effect. a


From problems to progress

That you can take countermeasures against the negativity effect does not mean that mentioning and talking about problems should become forbidden. Talking about problems can be a very useful first step to make progress. The condition is that you have an effective way to get beyond problem talk. Progress-focused techniques such as our 7 steps approach, the circle technique, and the plus behind the minus can help you do this.
awareness bias contagious countermeasures effect individuals negativity Progress progress-focused teams