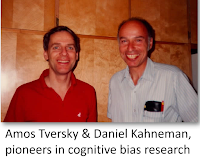 One of the ways we can counter irrational beliefs is by informing ourselves about some well documented cognitive biases, heuristics and effects which all to some extent skew are perception of reality, usually without us being aware of it. I'll keep my explanations brief because it is quite easy to learn more about each of these biases, heuristics and effects by googling them.