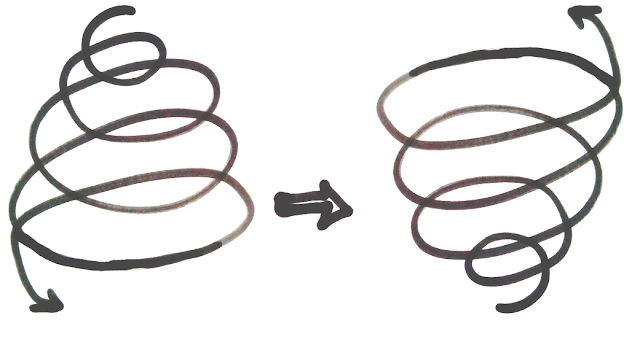 
Addiction is a preeminent example of a downward spiral. When people use drugs they are looking for the pleasurable effects of the drug they are taking (relaxation, ecstasy, etc.) When the frequent use of the drug leads to a decreased sensitivity for the drug (something which happens with many drugs) the person will want to take the drug in increasingly higher doses in order to get the same effect.

In social interactions there can also be downward spirals, for example in escalating conflicts. In human interaction the principle of reciprocity is applicable. It means that people are inclined to give back what they receive. If one person says something offensive to another person, it will be likely that the other person will say something offensive back. In other words, if we feel we are treated negatively, we will tend to respond negatively. You probably already recognize what is starting: a downward spiral in which the two people will continue to keep responding negatively to each other. An escalation is happening.

Downward spirals can also happen in groups and even in and between societies. An arms race is an example of such a downward spiral. If one country arms itself against the other country, which it sees as a threat, the other country will be inclined to arm itself more heavily in return. This, in turn, will increase the perception of threat due to which the first country will feel inclined to further arm itself. And it goes on like this.

Even our way of thinking about ourselves and about the world can bring us in a downward spiral. First, this is because we tend to behave in accordance with our beliefs and expectations. If we think fatalistically about the solubility of a problem or the attainability of a goal, the chance will be small that we will work hard and persistently to make progress. Because we do not work hard to make it happen the chance of progress will be small which will maintain our fatalism (or increase it). Second, it is because of the fact that we tend to perceive ourselves and the world in accordance with our beliefs and expectations. This is called the confirmation bias. It means that we have a skewed way of perceiving. Without us being aware of it, we tend to see what we belief and expect. If, for example, you expect that people won't treat you kindly, you will be likely to interpret their (perhaps neutral) behavior as unkind due to which your expectation appears to be confirmed and is therefore strengthened.

These downward spirals often come to a sudden and harsh ending because the situation becomes untenable at some point. Here are two examples. The addicted person starts to embark on a criminal path to pay for his addiction and sooner or later gets arrested. Or the downward spiral will come to a dramatic end by the person taking an overdose. A second example: a conflict can escalate so much that the environment will intervene to end the downward spiral.

A better way to end downward spirals may be (and here I follow the example given by Alex Korb in his book) to replace them by upward spirals. An upward spiral is also characterized by a self-amplifying effect but in a healthy, constructive manner. Daily exercise is a good example. That daily exercise is healthy will not surprise you. Also, you will know that it can be hard to motivate yourself to go out and exercise. But if you take a small step in that direction it will become a little easier. The reason is a positive feedback loop, or, put differently, an upward spiral. As you exercise, certain substances, such as serotonin and endorphin's, are produced in your brain which give you a pleasant feeling. This pleasant feeling makes it a little easier to start exercising again, the next day. What might develop could almost be called a healthy addiction.

Upward spirals also exist in various forms and shapes. An example that comes to mind now is one which I have described in the article Interest as drivers of competence development. If you engage in something that interests you you will not only learn better but also get energy from it and will find that your interest in the subject refreshes itself due to which you will want to keep learning more. This is another example of a beneficial positive feedback loop.

Questions: which other examples of downward and upward spirals can you think of? Have you ever experienced that you have been able to end a downward spiral by replacing it with an upward spiral?
addiction Alex Korb arms race Conflict downward Feedback loop negative positive spiral upward