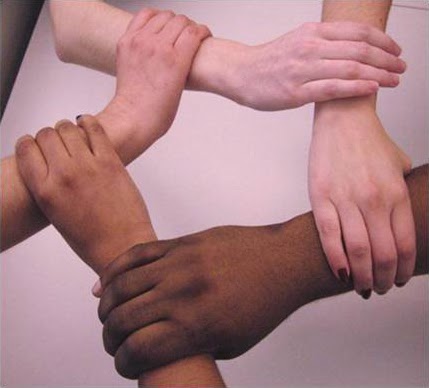 Nowadays we hear a lot about racism and how bad it is. Famous football players, in a UEFA campaign, are sending the message to say 'no' to racism. By using the word racism we refer to the underlying concept of race. Races, subspecies, exist throughout biology. We all understand, perhaps not precisely, but roughly what is meant when we talk about human races and racism. I say that we understand roughly what is meant, because we all associate the term race with concepts like the with race, the black race, the Jewish race, and the Asian race. I say that we do not know precisely what is meant, because we do not know exactly, for example, what makes someone a Jew, and whether Chinese people and Indian people belong to the same race. It also gets confusing when we think about the race of president Obama. Does he belong to the 'black' race? That is what is often said ("the first black president' of the United States) but what about the fact that his mother was 'white'?

We implicitly tend to base our thinking about races on a number of superficial characteristics such as physical appearance (mainly skin color), behavior, and geographical background. Especially physical characteristics seem to be important in how we think about someone's race. Obama is probably called the first black president because he has dark skin. The word 'black' does not literally refer to his own skin color, which is brown, but apparently to his 'race', the 'black' race. Is our way of thinking about races right? Can people be categorized into races?

Geneticist Adam Rutherford wrote an interesting article in The Guardian in which he argues that human races do not exist. He argues that the way we talk about races is not valid because people can not be divided into subgroups based on their genetics. There is no essential characteristic for 'black' or 'white' people. He does not say this in order to meet some social desirable ideal but because of scientific facts. There are no genetic differences which characterize populations which we think of as races exclusively.

In a next article Rutherford responds to the fact that he has received many critical responses to his article along the lines of, "Of course races do exist! It is something you just see, right?" He explains that reality is to a large extent different from how we perceive it. Evolution has equipped us with a way of perceiving and interpreting reality which has helped us to survive but which is not particularly good in seeing reality as it is. We are not very good at thinking logically and statistically, in seeing real trends and we see patterns and causes were there aren't any. Science is fundamentally different from common sense. Through science we have discovered all sorts of things about reality which are at odds with what our common sense would say. Because findings from scientific research are often at odds with common sense it can make us uncomfortable. This is also the case with the discovery that there are no biological human races. This explains indignant responses like: "Of course they do exist!" A same indignation was once felt about the idea that not the earth but the sun is at the middle of (our part of) the universe.

What does this imply? What is the best way of talking about creating a better wold in which people have equal opportunities and can develop themselves? Must we say no to racism? Or do we, by doing that, reinforce the idea that there are indeed human subspecies which are indeed qualitatively different? My worry is that this might reinforce a fixed mindset. If we ask people to say 'no' to racism it is as if we say that people indeed belong in different boxes but that these boxes are equivalent. But perhaps it is unwise to put people, on the basis of their skin color or cultural habits, into boxes. By doing this we may create a self-fulfilling prophecy: people may start to behave in accordance with the label they've been given. And we may also start to expect people to behave according to their own box. I have heard someone disapprovingly use the term Bounty (a Bounty is a chocolate bar which is brown on the outside and white on the inside). She described a person with a brown skin which, in her view, behaved like a 'white' person. Tsss, can you imagine the shame? How dare this person?

A better option would be, perhaps, to say that as the human race, we are one. The boxes are an illusion. We all belong to the same species and there are no subspecies. We all can and are allowed to grow in whichever direction we want and wherever we want.
Adam Rutherford boxes culture divide fixed mindset human rights humanity Obama race racism science self-fulfilling prophecy skin color subdivide