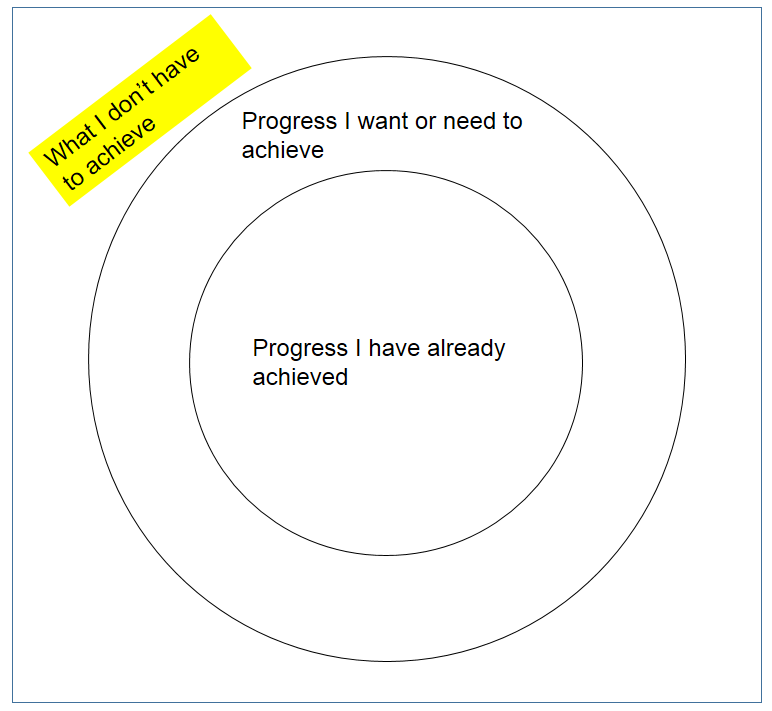 The progress-focused circle technique is getting more well-known and popular. It works like this: the coach draws two circles on a piece of paper or on a flip-over sheet, an inner circle and an outer circle. On small post-it notes clients write down what progress they have already achieved and then they hang them in the inner circle. Next, clients write on post-it notes what progress they further need and/or want to achieve and they hang these in the outer circle. Finally, clients choose which note(s) they first want to be able to move from the outer circle to the inner circle and how they will try to accomplish this.

On the first day of a training I gave to a group of teachers I explained the circle technique and invited them to experiment a bit with it. I also gave an example of how I had once used the circle technique with a client of mine. What was interesting in that situation was that my client had not only hanged post-it notes in the inner and outer circle but also outside of the outer circle. He explained: "I won't be able to achieve those things anyway!" The fact that he hanged a few post-it notes outside of the outer circle I found somewhat surprising but it did not form a problem in any way. Shortly after I had coached him he achieved a terrific result.

On the second day of the training the teachers who participated in my training told me what they had tried out and had found useful. Several participants mentioned the circle technique. One teacher had used it in his classroom. At first, his students had responded slightly reserved. One of them asked: "What kind of game are we going to play now?" But when they got going the process became useful. They enjoyed to see what they themselves and their classmates had already achieved and they also found it useful to get a much clearer idea about what they still needed to do. They left the classroom quite satisfied.

Another teacher had also used the circle technique and she also had found it useful. She had used it as a self-coaching tool. She, of course, had first written down what she had already achieved in the inner circle. Then, she had written several things in the outer circle which she needed and wanted to accomplish next. In addition to this, she had also, just like my client in my example on the first training day had done, written a few things outside of the outer circle. She said that this may actually have been the most useful thing of the exercise: "There, I wrote some things of which I decided that I, for the time being, did not have to do anything with. It relieved me to be able to put those things beside me and to focus only on the things that were in the outer circle."

I find this a very interesting thought. In order to have a clear focus it not only helps to know what you want to focus on but also what you don't have to focus on.  Those latter things can be written outside of the outer circle. What a relieve!
circle technique classroom focus inner circle outer circle outside of progress-focused releve self-coaching teachers training