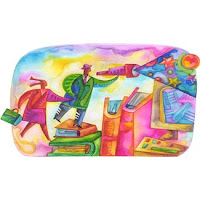 As mentioned before on this site, I am rather reluctant about the usefulness of a giving advice - especially unasked-for advice. In general my assumption is that self-found internal solutions, solutions which are based on people's own experience and which they can apply themselves without help or training by others, are the most motivating way forward in many situations. By the way, from this, it does not follow that we can't help other people. We can actually help people identify their own internal solutions. But the way to do this is not to offer them judgments and advices. Instead, through a process of asking carefully chosen questions and interventions people can, in many cases be helped to find their own solutions to problems (here is an example of how such a helping strategy may be designed).

I believe that self-found internal solutions are preferable in many, perhaps most, situations but not all situations. My hypothesis is that the more people's sense of autonomy and competence is threatened, the more useful self-found internal solutions are. The more people feel that their need for autonomy and competence is threatened or thwarted, the more they are likely to resist judgments and advices provided by others in particular when these judgments and advices are in contrast with their own views and experiences. My hypothesis is that, when people feel relatively autonomous and competent, they will be less inclined to respond defensively to judgments and advices and more inclined to solicit others' advice and opinions and even criticism. In these circumstances advice and opinions may be very useful.

Pratice based learning can but does not have to be unsystematic. A systematic approach to pratice based learning is the test-and-learn approach which is based on the assumption that learning is an iterative and circular process. It can be described as follows: 1) determine what you would like to achieve, 2) chose a small step forward in the right direction, based on your previous experience, 3) take that step forward, 4) reflect on what happens, 5) respond to the consequences of your step, 6) build what you learn into your next step, 7) repeat these previous steps until an meaningful pattern begins to emerge. The test-and learn model is a dynamic model in the sense that the goal is not some fixed picture but something which keeps on developing as the process proceeds.

Practice based learning is indispensable but not without limitations. The quality of what we learn depend on and is limited by what we do and don't try and on how well we are able to interpret what happens as a consequence of what we try. That human perception, judgment, logic, and rationality are fallible has been documented by much research of psychologist and behavioral economists (one of the most deceptive pitfalls is the self-fulfilling prophecy). Also, relying only on practice based learning would be inefficient. It would mean you'd had to miss out on much useful knowledge developed by others.

Theory based learning both has the potential of correcting invalid assumptions we may have developed or been bee taught and to suggest new practices we may have never considered. Having said this, it is important to emphasize that theory based learning is also limited. Scientific findings may sometimes be robust and easy to implement; in many other cases they may be less robust and harder to interpret.

I suggest that effective functioning and learning will often be a matter of both using universal and particular knowledge. Universal knowledge describes are broad and generic patterns, principles and mechanisms, which apply in a domain. Particular knowledge refers to principles which are applicable for a specific person in a specific, unique, context. I suggest that practice based learning's primary strength is to build idiosyncratic knowledge, whereas theory based learning's primary strength is to apply generic knowledge.