How does grading affect motivation? 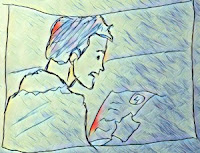 The researchers primarily looked at the role which basic psychological needs (of autonomy, competence, and relatedness) play in potentially undermining effect of performance grading on motivation. Students from 31 classes from 29 schools in Belgium completed questionnaires measuring their motivation, fear, and their psychological need satisfaction after two lessons: one with and the other without their performance being graded. After the lessons in which they were graded, students reported less intrinsic motivation and identified regulation (a form of internalized motivation) and more external regulation, amotivation, and fear. The shift from autonomous motivation to controlled motivation thus indeed happened as their performance was graded. As expected, the degree to which they felt their basic needs had been satisfied played a mediating role in this shift. The figure below shows the relationships between the measured variables. 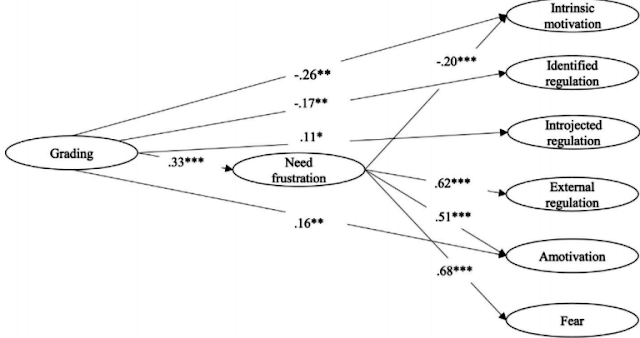 Taking these results into consideration it seems wise to think carefully about the use of grading in schools. Perhaps we should emphasize grades less and also use them less frequently. Maybe it is not necessary or possible to completely abolish performance grading in education and perhaps its use can be useful or even indispensable. Perhaps this depends on the subject. But instead of thinking about them as tools to motivated students we should only think of them as tools to inform them. And when grades are used it seems wise to explicitly do things which support the basic needs of students, such as offering choice, giving competence-supportive feedback, and fostering good connections between students and teachers.
autonomous basic needs education grades grading intrinsic motivation performance Schools