The effects of compliments are not always what we expect from them. In this book, 36 researchers in 16 chapters analyze praise from different theoretical perspectives such as the self-enhancement theory, the self-verification theory, the attribution theory, and the self-determination theory. Below I briefly discuss two interesting chapters from the book.

A transactional model of compliments

Eddie Brummelman and Carol Dweck (H7) explain that parents and teachers often feel responsible for children's self-esteem and motivation. In countries traditionally referred to as "Western" countries, many adults believe that complimenting children is a good way to boost children's self-esteem and motivation. But the effects of compliments are often paradoxical.

Brummelman and Dweck present a transactional model of praise that describes a process that explains how adults often give (and continue to give) ineffective praise to children despite this ineffectiveness. This cyclical model consists of four steps: 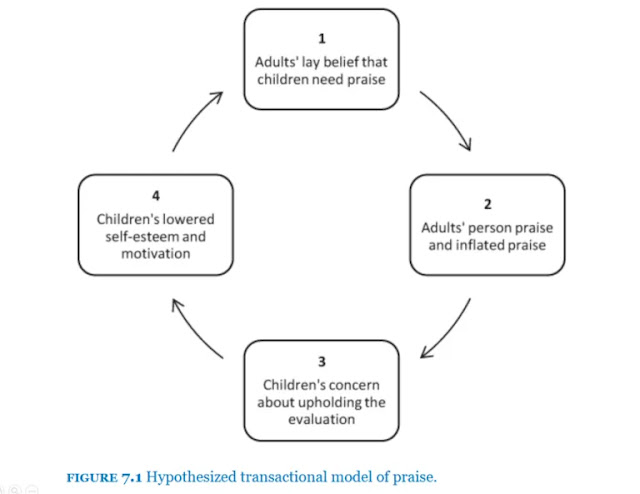 In this cycle, complimenting starts from the idea that children need compliments to feel good about themselves, that the self-esteem resulting from compliments is necessary to be motivated and that good motivation is the basis for development and achievement (step 1). In step 2, they explain that compliments can vary in focus and intensity:
When ("Western") adults feel that the child's self-esteem and motivation are not as strong, they are often more likely to give person-centered and inflated compliments. In step 3, the authors explain how children respond to compliments. At first, a child often feels good after a compliment. Secondly, however, person-centered and inflated compliments have significant drawbacks.

From person-centered compliments, children infer that the complimented quality (for example, intelligence) is considered important and that the adult thinks the child possesses this quality. In response to this, children often develop a concern about the extent to which they actually own the trait. They may start to avoid challenges for fear of not being able to live up to the compliment. Giving person-centered compliments can generate a fixed mindset and have long-term effects. Process compliments do not have this disadvantage. They often generate a growth mindset and stimulate the search for challenges.

Adults often do not notice these adverse effects well. They see the child's initially happy response as an indication that their compliment was effective. The adverse psychological process in the child's mind takes place later and is not clearly visible to the adult. Adults do not associate future avoidant behavior and further reduced self-esteem with their own inflated compliments. In fact, when they perceive the low self-esteem, they often tend to start over-complimenting again.

Compliments through the lens of self-determination theory

Bart Soenens and Maarten Vansteenkiste (4) look at praise through the lens of self-determination theory. They summarize their discussion of the factors involved in praise and the effects of these praise in the following figure: 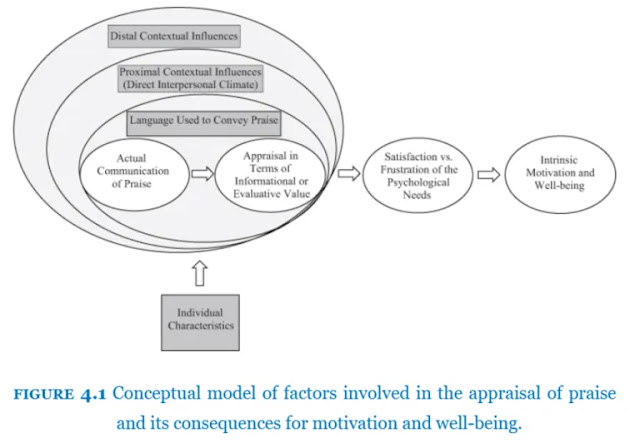 The timing of compliments can also have an influence. Compliments can be perceived as controlling when parents use them to communicate conditional regard. This parenting style, in which parents mainly or only communicate appreciation for the child when it behaves as they wish, can be harmful.

Process-oriented and realistic compliments are informative

Inflated compliments also often have relatively little informative value because they can be interpreted as too general, unrealistic or insincere. Additionally, they can come across as controlling by being interpreted as communicating a lofty expectation.