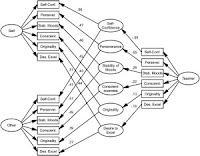 Personality: stable over situations and time?

That personality is stable has been questioned since the beginning of the 1970s by Walter Mischel who did research which suggested that situations have a strong impact on how we behave. Within psychology there is a name for the tendency to systematically (yet unconsciously) overestimate the influence of personality and, at the same time, underestimate the influence of situations on our behavior: the fundamental attribution error.

Personality may be more malleable than we thought

The supposed stability of personality over time was mentioned by some as an argument for the statement that personality can hardly be changed. I never found that to be a strong argument. That a characteristic in a large sample does not change much does not prove it cannot be done. The majority of the people may not have tried to change it or those who have may not have used an effective approach. In other words: observed stability does not prove unchangeability.

But now it seems that even this stability argument cannot be used anymore. In this sample personality was unstable and we do not have any reason to suspect that these people have systematically tried, more than people in general, to change their personality. In this post I show what such a systematic approach to changing personality might look like. I suspect more and more that personality is much more malleable than I was taught.
2016 assessment Harris life span malleable mindset personality personality development self-assessment stable Walter Mischel