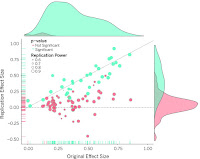 What does this mean? This new research is a step in the good direction. It shows how important replication studies are and it show that the robustness of findings in social science leaves much to be desired. Science has to be self-correcting. That faulty findings are sometimes reported is inevitable but a well functioning replication practice helps to identify those faulty findings. Journals must start to value replication studies more. Scientists must become more transparent about their methods (and preferably publish them even before they conduct their studies so that fiddling will become much harder.
crisis effects findings methods Nosek Problem psychology replication robust science