Is there such a thing as civilization?

Is there such a things as civilization? Or is what we call civilization an illusion and would we be wiser to return to our natural state?

A central theme in the discourse about progress was the difference between the views of the English philosopher Thomas Hobbes (1588–1679) and the French philosopher (from Swiss origin) Jean Jacques Rousseau (1712–1778). Hobbes view people as naturally cruel and violent, in other words as bad. In his book Leviathan, he explained that the solution for this problem is a monarchy or other form of government which represents the will of the people and has the monopoly on violence.  He saw civilization as a way of curbing people's badness.

Rousseau, author of Du contrat social, roughly had the opposite view. He wrote: “Nothing can be more gentle than [man] in his primitive state….” Rousseau thought that people were free and pure by nature and he viewed 'civilization' as something which turned people into beasts. John Dryden coined the term noble savage to describe people in their natural state, at least as Rousseau viewed them.

As Steven Pinker writes, in The Better Angels of our nature, Rousseau's view became the most popular view in the second half of the 20th century. This popularity was, among other things, a reaction to the racist doctrines which had caused so much harm in the first half of the 20th century. It was also supported by the work by anthropologists like Margaret Mead who did participant observation research on the Samoan Islands.

In the time of Hobbes and Rousseau nearly nothing was known about living in prehistoric times. Whether people are naturally good and civilization bad or vice versa was a matter of speculation. There were no written accounts and there was no way of doing empirical research. All they had at their disposal was assumptions and the use of logic. As turned out later, Margaret Mead's work also does not seem to give many reliable insights. Here conclusions became largely discredited when scrutinized.

The debate continues. There remain adherents of both the noble savage theory and the brutal savage theory. But today, much more is known about life in prehistoric times. My understanding is that Hobbes was more right about this matter than Rousseau. As Steven Pinker explains here, there are two types of evidence which are relevant to the question. The first type is archaeological. By look at which proportions of prehistoric skeletons have signs of violent trauma, estimates can be made of the percentages of violent deaths in societies through the ages. This line of research shows that the rate of violent deaths in prehistoric times was much higher than in modern societies (see picture below). 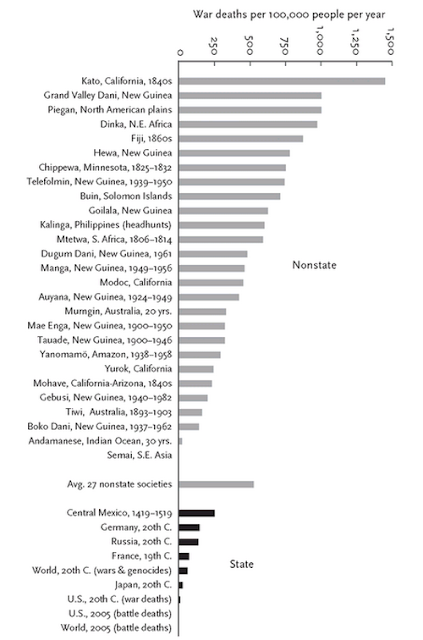 A second line of evidence can be found in what Pinker calls ethnographic vital statistics. He refers to long-lasting research which has been done in places in the world in which there are still non-state societies. These societies are still hunter-gatherer societies in recent history and our time. The picture below show that, also in recent history and our current time, people in non-state societies are more violent on average than in state-societies. 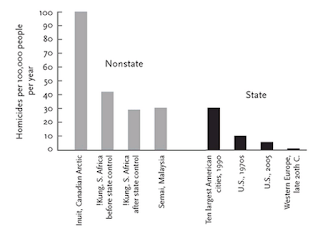 It seems that civilization makes sense. Living in primitive times was, and in current primitive societies is, relatively hard and brutal. The competition for food and sexual partners was tough and there was no objective arbiter in the form of a government to intervene, mediate, judge, and sanction. In a recent article, more evidence is listed. The article claims that well-known (former) Rousseau adherents have started to acknowledge more and more that in hunter-gatherer societies the percentage of violent deaths was much higher than in our modern societies.

I do not view this as evidence that people are naturally bad. And I also don't believe that people in current-day less developed societies are inherently bad. What I deduce from these findings is that we, as human beings, need structures, regulations, laws, norms, and governments to bring out the best in ourselves. Civilization exists. It is worthwhile to keep investing in it.
civilization ethnographic evidence Jean Jeacques Rousseau Levithan Margaret Mead noble savage skeletons Steven Pinker Thomas Hobbes violence