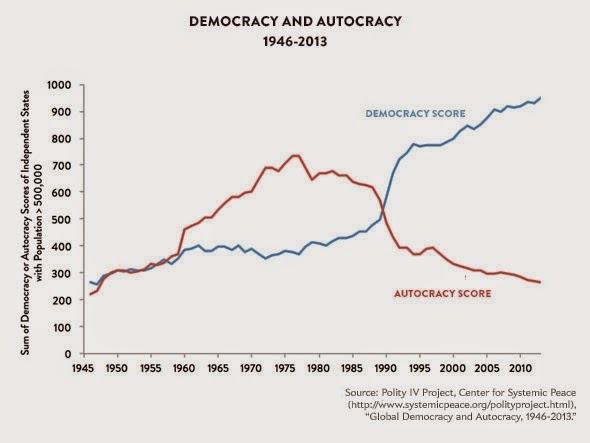 The new radio advertisement of UNICEF in my country says: "The world is on fire. But children did not light it." I believe that UNICEF is a great organization but I dislike that they use the phrase "the world is on fire".

There is, of course, much suffering in the world and there are gruesome things going on. It seems like the daily news is filled with stories about war, terrorism, and crime. But if the daily news is the only thing you depend on, the world always looks like a powder keg. And while I think it is useful and necessary for the news to pay attention to the horrors of the world, there is another way of looking at reality which is also important.

That way of looking is to observe worldwide trends in things we consider important. If you do that, as Steven Pinker and Andrew Mack do in this article, you can see that meaningful progress in the world keeps happening. The numbers of armed conflicts and wars decrease, the numbers of homicides and genocides fall, violence against women and children diminishes, democratization increases, and so forth.

There are fires and serious threats but to say the world is on fire veils the fact that, on the whole, the world keeps getting better. It is essential to recognize that the large majority of humanity keeps making meaningful progress. If we do not acknowledge that, it is easy to be cynical and fatalistic. And cynicism and fatalism won't help us to keep progress going.

Update January 25, 2015: This article show another list of progress trends: