In this article I describe new research by David Yeager and his colleagues into how mindsets about abilities and mindsets about stress can reinforce each other, in a positive and negative sense.

New demands can cause stress

The content of work and the demands that work places on people are changing dramatically. For example, knowledge and skills in the use of computers, in programming and in the application of mathematics are increasingly useful. They contribute strongly to technological innovation and thus to the solution of many problems and they provide many conveniences for people. That is why these kinds of skills are increasingly required of people in education and work. But these new demands are stressful for many. This stress can be related to two types of appraisals that come to mind.

The first type of appraisal has to do with your mindset about your own abilities. For people who don't see themselves as a "computer person", the requirement to start working with new software can be stressful. If they that they do not succeed immediately or that they find it very difficult, the kind of thoughts that may come to mind are: "I am not good at this" and "Will this ever work?". This is a fixed mindset response. An alternative appraisal is a growth mindset response. The kind of thought that may come to mind here is, "This is an opportunity for me to learn something new."

The second appraisal has to do with how you interpret your own stress response. A first interpretation could be that your stress is an indication that you are going to fail. An alternative interpretation could be that the stress is your body's natural and beneficial response to doing something challenging. Interesting research has been done on stress mindsets by Alica Crum and her colleagues (read more).

These two appraisals can reinforce each other in a positive but also in a negative sense. The figure below shows that: 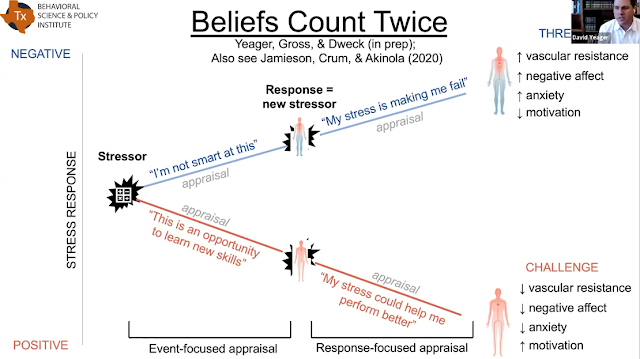 The top path in the figure shows two subversive appraisals. First there is the fixed mindset, then the "stress undermines me" mindset. This pathway leads to vascular resistance (blood vessels constrict), negative affect, fear, and decreasing motivation. The bottom path first shows a growth mindset and then a mindset of “stress helps me”. This path leads to persistence and growth.

Yeager et al. (in prep) designed an intervention aimed at influencing both the ability mindset and the stress mindset of students. The intervention consisted of two parts. Part 1 consisted of the growth mindset intervention that aimed to teach participants that abilities can be developed and that this insight helps you see struggles as a path to improvement (rather than as a sign of inability).

Part 2 was aimed at teaching a positive stress mindset. This aimed to teach the participants that your stress response can help you improve your performance. This insight can help you use your stress as a way to develop your abilities.

They tested this intervention in multiple studies and it consisted of three parts. First they offered them scientific information, then they had them read stories of older students, and finally they used say-is-believe writing techniques (where they had to write advice to a fictional other student who was struggling).

Stress levels during a presentation

In one of the studies, they had subjects prepare a speech that they then had to give. The audience at the speech was trained to react emotionally flat, neither positively nor negatively. After the speech, the subjects had to do calculations aloud in front of a non-responsive audience. Then they could recover from the tasks. The figure below shows how their stress developed during this study. As can be seen, the stress among the participants who received the mindset intervention was lower throughout the process. This positive effect was strongest for people who previously had negative mindsets and for women.

In a diary study, students from socioeconomic disadvantaged populations recorded twice a day for five days how much stress they were under and how good or bad they felt about themselves (this is the degree to which they internalized). The figure below shows the results. The more stress the students had, the worse they generally felt about themselves. But students who received the mindset intervention reported a lesser degree of internalization to stress. The higher the stress, the greater the difference in internalization between the experimental group and the control group.

The researchers conducted another diary study in first-year students in relation to the COVID-19 situation. By January 2020, they had taken baseline measurements on these students before the COVID-19 pandemic broke out. They were then divided into the control group and the experimental group (the latter received the synergistic mindsets intervention). COVID lockdowns took place in March. In April they measured the fear among these students. They found that the students who had shown negative mindsets in January and women showed much less anxiety in April in those who had undergone the mindset intervention (see figure below).

The fixed mindset and the negative stress mindset can together lead to a negative spiral. The fixed mindset increases your stress response. The negative stress mindset is a surplus problem. It exacerbates your stress and undermines your motivation and performance. This can increase your tendency to avoid this stress-inducing task (a math problem, for example) even more in the future and to experience even more stress if you do run into it.

Conversely, a growth mindset together with a positive stress mindset can lead to a positive spiral. In a growth mindset, you see the difficult challenge as an opportunity to learn from. You consider the stress you experience as normal and even support your performance. Taken together, this lowers your fear of these types of challenging tasks that you will not avoid and even seek out in the future.