Mindsets are important in all areas of our lives 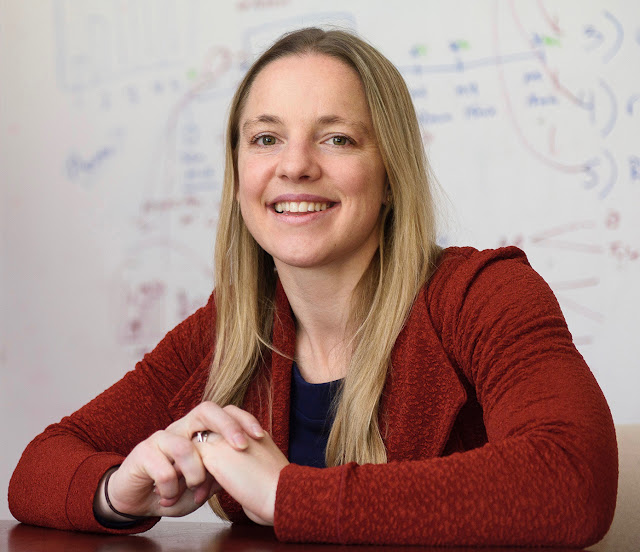 Mindsets are important in all areas of our lives.

We know the concept of mindset from the work of Carol Dweck. She made the word widely known through her 2006 book. Dweck and her colleagues did a lot of research into the effects of how we think about the malleability of intelligence.

But Alia Crum (photo), assistant professor at Stanford University, comes up with a broader definition of the concept of mindset. Her work shows how important our mindset is in about everything we encounter in life. Mindsets play a significant role in our health, our well-being, and our performance.

Crum defines mindsets as the lens through which we look at the world. This lens is made up of the core assumptions we make about the nature of things (such as intelligence, health, exercise, stress, etc). The mindset with which we approach the world affects what explanations (attributions), expectations and goals come to mind.

This definition is somewhat abstract. But it will probably come to life more if you have read a little more about various studies that Crum and her colleagues have done.

Crum's interest in mindsets was triggered when she heard about research by Fabrizio Benedetti. He and his colleagues investigated the placebo effects of anesthesia in operations on organs in the chest, such as the heart, lungs and coronary arteries. Anesthesia takes place by administering morphine. Benedetti et al. found that how morphine is administered influences its effect.

In one study, morphine was administered in one condition by a physician, in the other in an automatic and unnoticeable manner via a pump. The effect of the morphine was significantly stronger when administered by the doctor. Benedetti has since made similar findings in a variety of other conditions and treatments, such as anxiety, Parkinson's disease and high blood pressure.

Another researcher who inspired Crum was Ted Capchuck. Among other things, he conducted research into placebo effects in acupuncture treatments.

In one of his studies, there was one control condition (a waiting list) and two placebo conditions. In one placebo condition, the needle did not actually penetrate the skin, in the second condition the needle also did not actually penetrate the skin, but the practitioner was also very warm and seemed to really care about the patient. This caring, warm treatment, in particular, had a strong placebo effect.

Mindset plays a role in the effects of physical exercise

Crum wondered to what extent placebo effects also play a role in other facets of our lives. Together with Ellen Langer she conducted a study among room attendants in hotels (Crum & Langer, 2007). Most of them said that they did little or no exercise. This was remarkable because they performed all kinds of physical activities in their work. Crum and Langer conducted a study in which they measured fat, blood pressure, weight loss and job satisfaction among the room attendants.

After the first measurement, half of the cleaning ladies received a 15-minute presentation, the other half did not. The information in that presentation was that the work they did (cleaning hotel rooms) is good exercise and meets the Surgeon General's recommendations for an active lifestyle that leads to positive effects. A second measurement was taken after 4 weeks. In the informed group, the participants showed improvement in all areas: less fat, lower blood pressure, weight loss and more job satisfaction. This while their day had not changed.

Mindset affects our sense of satiety

In a follow-up study (Crum et al., 2011), participants were given $75 to taste milkshakes. Before eating the milkshakes, the subjects measured the amount of grehlin in their blood during and after eating. Grehlin is popularly called the hunger hormone. When it is secreted through the stomach wall, we get hungry. When we have eaten, the level of grehline decreases. In the study, one milkshake was made, but it was presented in two very different ways.

One way was under the name Sensishake, the other under the name Indulgence. When describing the "Sensishake" it was said that it contained less fat and sugar than it actually did. The "Indulgenge" was said to contain more fat and sugar than it actually did. Although it was exactly the same milkshake in both cases, the level of grehlin dropped significantly more after eating the Indulgence. Apparently, the belief that more calories had been consumed had an objective physiological effect: greater satiety. What we think will happen determines our expectation. Our expectation then partly affects how our body reacts.

Mindset influences the effects of stress

Many people view stress as a bad thing. We are also often told that stress is bad. But the truth about stress isn't that simple. Stress can have negative consequences, but it can also be good for our performance and even necessary for peak performance. Crum et al. (2013) conducted research among employees who experienced a lot of stress in their work shortly after the financial crisis of 2008.

The participants were divided into two groups, each of which was shown a short video about the effects of stress. The first group was shown a video in which the negative sides of stress were highlighted. In video 1 it was stated that stress can cause your ability to think clearly, your ability to concentrate, your decisions and your functioning are undermined. In video 2, it was stated that stress increases your energy and alertness and is necessary for peak performance. People who had seen video 2 reported fewer health complaints and functioned better in the following weeks.

Crum and her colleagues recently conducted research into the effects of mindset on coping with the effects of medical treatments (including Howe et al., 2019 and Leibowitz et al., 2021). With certain types of treatment, such as for food allergies), certain symptoms occur during treatment. For example, in the treatment of food allergies, patients are given small amounts of the substance to which they are allergic. This is annoying but a normal phenomenon with such a treatment. Doctors often warn of these symptoms with the best of intentions and mention side effects. Patients may feel that these "side effects" are something negative and, when they experience them, even that the treatment may not work very well for them.

In one study, Howe et al. divided patients (children with peanut allergy) into two groups. One half was informed that symptoms are unfortunately a side effect of the medication. This information was intended to elicit a symptom-as-side effect mindset. The other half received the information that symptoms are positive signs that the treatment is working. This information was intended to elicit a symptom-as-positive-signals mindset.

These different mindsets were indeed elicited in the patients. The symptom-as-positive-sign patients were less anxious (and so were their parents), had fewer symptoms as the treatment progressed, and benefited more from treatment.

In a recent lecture, Crum explains that mindsets are important, that they can be changed and that they interact with physical reality (for example our physiological responses). She explains mindsets are created by how we are influenced by our environment, by specific social interactions and by our own choices. She goes on to say that we have mindsets because events in our life are immensely complex, dynamic and subjective. We need mindsets to understand the world, predict what's going to happen and determine what to do. Mindsets influence where we focus our attention, how we feel, what we are motivated for, and how we respond physiologically. Together this in turn affects our health, our performance and our psychological well-being.

All this can be seen in the model below that she presents in the lecture.

A starting point within the progress-focused approach is that psychology contributes to our effectiveness and well-being in all facets of our lives (read more about this). One of the ways in which psychology matters is through our mindsets about everything that happens in our lives, including our mindset about all kinds of aspects of ourselves, our behavior, and our relationships. The research by Alia Crum and her colleagues shows this beautifully in my view.