Answers to four critical questions about the growth mindset 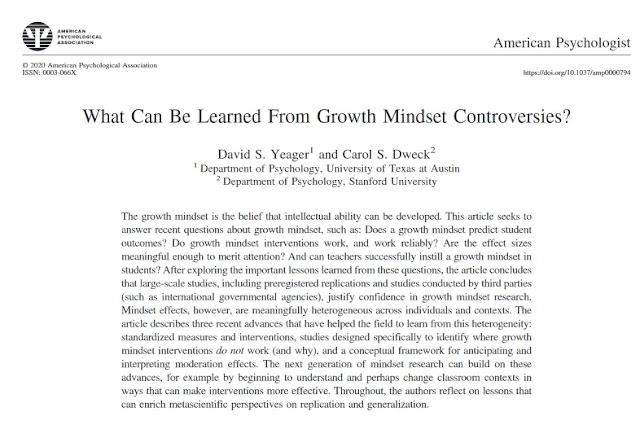 The growth mindset is the belief that personal characteristics such as intellectual abilities can be developed through effort and strategy. David Yeager and Carol Dweck have written an article which addresses four critical questions about the growth mindset:

Below I summarize the article without going into all the finer points and arguments in the original article. Think of my summary as an introduction to the article and do read the article itself to get the details behind the arguments and conclusions of the authors.

Research has shown that having a growth mindset increases the likelihood that you will deal effectively with adversity and continue to learn and grow. Having a fixed mindset is more associated with avoiding challenges and giving up after setbacks. Recent large-scale studies in which these findings were found are Yeager et al. (2019), Zhu et al., (2019), and Rege, et al. (in press).

The replication research trend is prompted by the so-called replication crisis in psychology which has been around since around 2011. This revolved around the fact that large-scale attempts at previously identified  psychological effects were in many cases unsuccessful. In the light of this trend, some critical publications have also been published about the growth mindset.

The trend of heterogeneity research is aimed at gaining insight into the question in which circumstances and for whom psychological effects occur to what extent (read more).

Yeager and Dweck discuss four controversies that have emerged from recent publications on mindset and try to learn from them.

A. Do mindsets correlate with numbers?

Next they describe studies that do not (seem to) support the theory (Bahník & Vranka, 2017; Li & Bates (2019); Sisk et al., (2018). The PISA study examined correlations between mindset and numbers in many countries. The figure below shows all correlations found in this study between the growth mindset and figures:

It is not clear why the Czech and Chinese samples did not yield a positive correlation. Yeager & Dweck speculate on a few possible reasons. Reasons for the Chinese sample may lie in the fact that a relatively small convenience sample was used or in the choice and translation of the mindset scale items. Also, these two findings (in the Czech Republic and China) may indicate that in these specific cultural contexts, the relationship between mindset and numbers is actually different from the many other samples (for whatever reason).

The meta-analysis by Sisk et al. (2018) did show a positive correlation, but it was smaller than that in most other studies. Yeager & Dweck explain that the explanation for this is that in the Sisk et al. study, the findings of studies were averaged where they gave very small and convenience samples about equal weight to results from large, more representative studies.

Yeager & Dweck conclude that the total of the studies shows that there is a clear and replicable correlation between mindset and numbers. This correlation is stronger in students who have difficulty and setbacks in learning.

B. Is the "meaning system" mindset replicable?

Doubts have also been raised about the mindset meaning system. This means the following. Mindset theory states that the two different mindsets lead to different types of goals, beliefs, attributions, and behaviors, roughly as shown in the table (by me) below:

Two caveats. First, there are different types of performance goals. Goals where you try to show how good you are at something (I call these show off goals) and goals where you try to meet a normative standard. The fixed mindset predicts the first kind of performance goals, not the second. Second, students with a growth mindset do not say they find grades unimportant. For example, they say: "I think it is much more important to learn than to get the highest grades."

The authors cite a study that does not support the system of meaning: Burgoyne et al. (2020) and speculate on explanations as to why these results differ. One explanation lies in the fact that these authors worked with normative performance goals (instead of "display goals").

The authors explain what growth mindset interventions entail. As I explain in this article, the intervention consists of three elements: 1) scientific credibility (by pointing to findings on neuroplasticity), 2) a catchy metaphor (for example, of the brain as a muscle that gets stronger through exercise), 3) ways to put growth mindset principles into practice (examples: statement by older students, writing assignments, and having students describe how a smarter brain could help them achieve what they want to achieve in their lives).

The NSLM study showed not only that mindset interventions had an effect on grades, but also on the tendency of students to take more difficult follow-up subjects. This finding was replicated by Rege et al. (in press). The correlations in these large-scale studies between a fixed mindset and the mindset meaning system are summarized in the table below.

This model says that positive effects of mindset interventions can be expected if they:

This model explains some unsupportive findings. Li & Bates, for example, did not (despite what they claimed) deliver a mindset intervention but an attribution intervention (read more criticism of their research here).

Sisk et al. did not look specifically at the effect of interventions for relevant target groups ("vulnerable" students) but for all students. But it is not surprising that students who already got good grades and already have a growth mindset don't get extra angry from growth mindset interventions. You also don't expect positive effects from pain killers when you are not in pain (read more criticism of the research by Sisk et al.).

3. Are mindset interventions too small to be interesting?

Researchers such as Macnamara and Sisk argue that the effects of mindset interventions found are so small that time and attention in schools could be better focused on other, more effective things. Yeager and Dweck explain in detail why Macnamara and Sisk use a wrong standard for what are typical effect sizes of interventions in education and that compared to realistic effect sizes, the effects of mindset interventions are indeed interesting and even impressive. Especially when you consider that these effects are also achieved through interventions that are small, simple and cheap.

4. Do mindset interventions work towards and by teachers?

After exploring the important lessons learned from these questions, the paper concludes that large-scale studies, including preregistered replications and studies conducted by third parties (such as international government agencies), warrant confidence in research on the growth mindset.

The article further details three recent advancements that have helped the field learn from this heterogeneity:

The next generation of mindset research can build on these advances, for example, by understanding and perhaps changing the context of classrooms that can make interventions more effective.