Students' functioning is influenced by their motivation. A new meta-analysis (k = 344, N = 223209) by Howard et al. (2020) maps the relationship between different types of motivation as distinguished within self-determination theory, and different aspects of student functioning. Below I discuss some of the highlights of this research.

Self-determination theory distinguishes the following types of motivation:
Because students, given their age, often do not yet have fully integrated regulation, this form is often not measured in studies conducted in schools.

How are motivation types related to functioning?

In their paper you can of course read the detailed findings. In the table below, I have summarized and simplified what I think are the most interesting findings. The columns show the different forms of motivation, the rows show the different outcome variables that were included in the study. 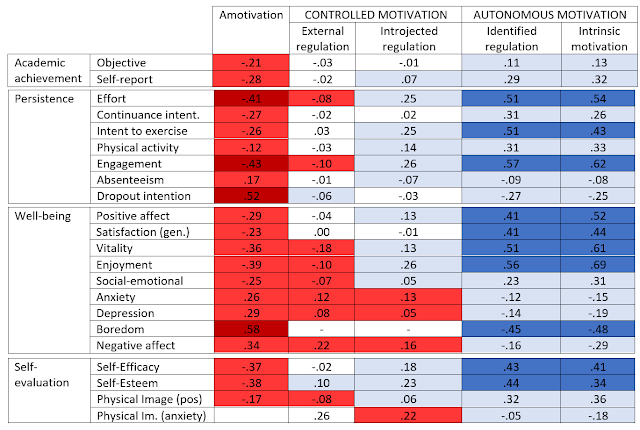 In general, introjected regulation appears to be less negative. It is positively related to some positive outcome variables (such as participation in class and - surprisingly - enjoyment). However, it is also negatively associated with some aspects, especially with regard to well-being. And it is much less positively associated with positive outcome variables than identified regulation and intrinsic motivation.

The researchers also performed a so-called relative weight analysis (RWA) to assess the unique contribution of types of motivation to outcomes. The table below shows the results, with the strongest predictor per outcome variable highlighted. 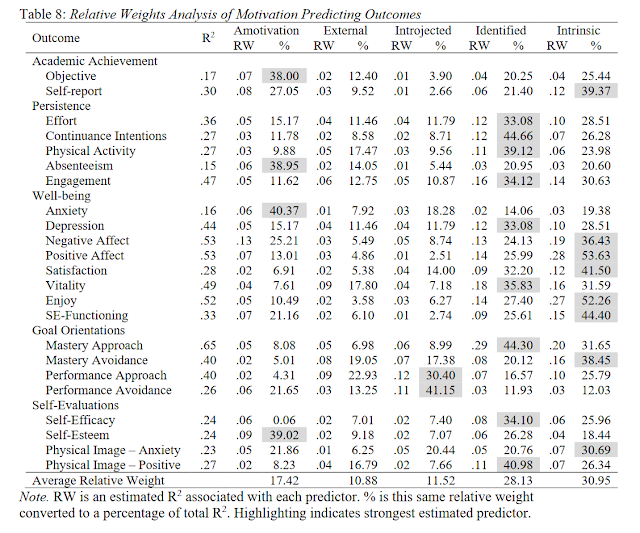 I gathered the following things from this research: