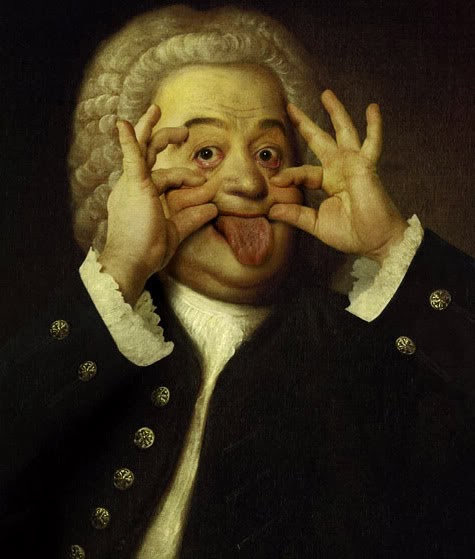 Johann Sebastian Bach was one of the greatest classical composers of all time (for example, read this and this). Many people have pointed out that his oeuvre is both enormously large and enormously varied and that it hardly has any weak spots. Many people even rave about Bach that his work is indeed flawless and use hyperboles like that Bach's music was divinely inspired, that Bach was God's pupil or even, perhaps only half-jokingly, that Bach IS God.

John Eliot Gardiner, the famous conductor, has written a new book called Bach: Music in the Castle of Heaven. In this video, he says that biographers of Bach make a logical error by thinking that because Bach made such great music he must have also been a great man. Then, Gardiner goes on to say that Bach certainly wasn't a paragon of virtue and that he actually was a deeply flawed character. He says this because in Bach's life, according to Gardiner, there is "almost a repetitive pattern of antagonistic behavior between him and authority -- the authorities for whom he worked". I agree with Gardiner's first assertion: great music does not imply that its maker was a great person. I find Gardiner's second assertion, that Bach's character was deeply flawed because he constantly seemed to be in conflict with people of authority, unconvincing.

Assertion 1: Great products don't imply great makers. I wholeheartedly agree. The greatness of Bach's work, however, does seem to say something positive about him. Being able to make such a huge body of outstanding music required an enormous and lifelong dedication. The level of skill which Bach developed is admirable. But this does not necessarily say that he was a great person in a broader sense. Bach's qualities such as dedication and discipline do not guarantee, for example, that he was also an honest or a kindhearted man. The tendency to generalize some positive impressions about a person to a whole range of other characteristics is known as the Halo-effect, a well-known cognitive bias.

Another mistake? Gardiner does not make the mistake of falling for the halo-effect bias but perhaps he falls prey to another mistake. In order to explain, I first have to introduce social comparison theory, which was initially proposed by Leon Festinger and later importantly advanced by others (such as Wills, 1981). The theory is about how people evaluate themselves by comparing themselves by others. They do this not only to get an accurate picture of how they are but, also to retain a positive image of oneself. The latter motive is called the self-enhancement motive. This self-enhancement motive is a strong motive which affects how we compare ourselves with other people and with who we compare ourselves. For example, we may use downward social comparisons to feel good about ourselves. Also, we may use upward social comparisons to inspire us.

The desire to detect weaknesses in high-achievers: When we witness someone doing something great, we may, among other things, experience an unpleasant emotion. We do not like to feel that the other person is better than us. In order to restore our sense of balance we may focus on what is wrong about the other person. By doing that, we may discover that the person may be great in one domain (for example 'composing') but terrible in another domain (for example 'a deeply flawed character'). I hypothesize that we may always have the reflex to focus on their weaknesses when we are confronted with a high-achiever. We may even perceive weaknesses that aren't there. Perhaps Gardiner needs Bach to be a deeply flawed person.
authority bias challenging character deeply depreciating downplaying flawed halo-effect John Elliot Gardiner JS Bach mistake self-enhancement motive self-worth social comparison theory weakness