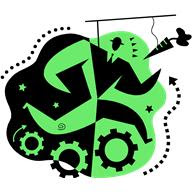 Also, I have mentioned another set of human forces which have been which have been described by Kay-Yut Chen and Marina Krakovsky in their book Secrets of the Moneylab (1 and 2 are competitive forces; 3 and 4 are cooperative forces)
The SCARF model (David Rock)
I've been thinking about what these two sets of how seem to be fundamental human needs or tendencies are related. There does seem to be some kind of relation between the two. But before I got around to exploring this question, Elta Boshard sent me a post by Ed Batista about the so-called SCARF Model by David Rock which is illustrated below (for a further explanation see Ed Batista's post). As the picture shows, David Rock seems to have used both sets of needs/tendencies: 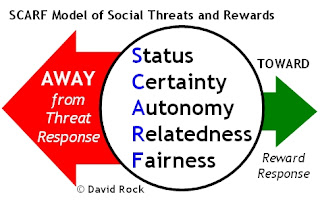 Basic needs x forces
Here is another attempt (by me) to explore the relationship between the two sets of motivators: