What Intelligence Tests Miss: IQ and rationality are largely independent

- October 14, 2009
I am now reading an interesting book titled What Intelligence Tests Miss: The Psychology of Rational Thought

by Keith E. Stanovich. The book is about the fact that IQ tests are incomplete measures of cognitive functioning. There is, as studies have show, in fact only a low to medium correlation between rational thinking skills and IQ test performance. And because rational thinking skills and IQ are largely independent it is not surprising that intelligent people can easily behave irrationally and hold false and unsupported beliefs. Several things are really interesting about this book. One is the authors insight that we do not need to stretch to non-cognitive domains (to notions as emotional intelligence or social intelligence) to see the lacunae in IQ tests. Another is the very specific and research based analysis of the topic matter. The author presents an elegant and rather comprehensive model of cognitive functioning in which three types of major thinking processes and their interrelations are described: the autonomous mind, the algorithmic mind and the reflective mind. 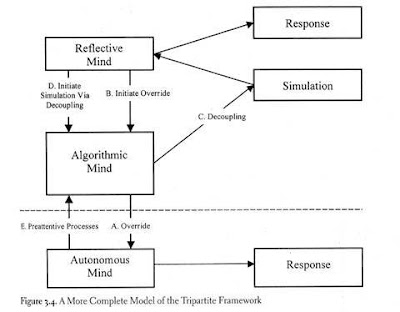 The autonomous mind refers to rapidly executed, non-consciousness requiring mental processes which are often quick and dirty. The algorithmic mind refers to conscious efficient information processing and is linked to what is usually referred to as fluid intelligence. The reflective mind is linked to rational thinking dispositions and deals with questions such as which goals to choose and why, and what action to take given those goals. As the figure shows, conscious thinking can override unconscious thinking, which is a good thing given the quick and dirtiness of the autonomous mind. The algorithmic mind is required for executing this override and thus very important. But the reflective mind is the process which initiates such an override. People with high IQ may be quite capable of overriding false beliefs and erroneous judgments but it takes the rationality of the reflective mind to initiate such an override.
IQ Keith Stanovich rationality What Intelligence Tests Miss