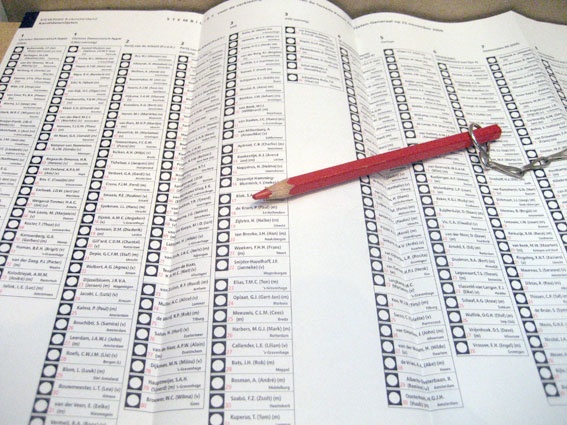 In a democracy citizens can express their political preferences and choose their leaders. A stable democracy has rules and institutions which limit the power of its leaders. An important way in which this happens is through the so-called trias politica, the separation of powers. According to this principle the state is divided into three organs which balance each other, the legislature which makes laws (usually the parliament), the executive power which exercises authority and holds the responsibility for governance (the government), and the judiciary which interprets and applies laws in the name of the state. Furthermore, a free press, which is sometimes referred to as the fourth power, is a necessity for a stable democracy. Without a free press it is impossible for citizens to get reliable information about what is going in the world and thus to form realistic political opinions. The more each of these things are lacking, the more the state will be an autocracy which means that the power is concentrated in one person or party and is not checked and limited.

The Enlightenment as the basis of modern democracy

In spite of what is sometimes claimed, democracy does not have its roots in the Judeo-Christian tradition. The first experiments in democracy were done in ancient Greece. But the main inspiration for modern democracy stem from the Age of Enlightenment (18th century) in which resistance to the autocratic power of kings and church emerged (Israel, 2011). In the Enlightenment a resurgence of the belief in the power of reason happened. Inspired by the successes of scientists such as Newton (1643-1727) Enlightenment thinkers began to believe that humans could increase their knowledge about the world and that this would benefit humanity. Among the important ideas within the Enlightenment were the principle of social equality and the principles of freedom of thought and freedom of speech. Although Enlightenment thinking resisted autocratic forms of religion it was not anti-religious as such. Instead, it advocated freedom of thought and thus of religious thought. From this principle followed that anyone should be free to adhere to any religion and also to not believe in any gods whatsoever. In order to both guarantee free of and from religion and to prevent autocratic forms of religion it advocated separation of church and state (secularism). To protect progress in knowledge and the principle of equality, the power of the church was also to be strictly limited in legislature and education. With these principles in mind it is easy to see that even the most advanced democracies today are by no means complete. There is much progress to be made.

Is democracy better than autocracy?

Max Roser (2016) has demonstrated how the number of democracies has slowly but surely, with ups and downs, has grown over the last 200 years. Is this a good thing? It certainly seems so. Citizens in democracies are generally wealthier, healthier, more satisfied with their lives, and better educated. Moreover, democratic countries are less likely to get into wars. That autocracies are more frequently in war has to do with who autocratic leaders operate. Autocrats continuously create conflicts with other countries in order to keep and increase control over their over population (read more). Having enemies gives them the opportunities to incite fear and anger in their population in mass gatherings, and an excuse to use violence, jail journalists, fire judges, eliminate opposition parties, limited civil liberties, etc. In other words, they undermine a separation of powers, they destroy the free press, and they abolish constitutional limitations of their own power and protections of civil liberties.

Yet you could still wonder if democracy is really better than autocracy. With democracies their is often much division about many topics which can create serious tension within society. At the same, in autocracies, there often appears to be a greater unity. Peoples within autocracies appear to be squarely behind their leaders and to have a strong sense of pride about their country and their leader.


Why democracy is better

Still the answer is: democracies are better than autocracies. The first reason is that civilians are better off in democracies than in autocracies in the following ways: wealth, health, freedom of thought and speech, satisfaction with their lives, and education. Also, they are less likely to get involved in war. The second reason is that the apparent unity in autocracies is base on a distorted view of reality and the effect of successful repression, propaganda, and intimidation. In this, there is an the-emperor-has-no-clothes-effect. That no critical voices can be heard does not mean that there is no criticism. Many are critical but, within a dictatorship, hardly anyone dares to be the little boy who says that the emperor has no clothes  (read more).

For a democracy to be sustainable it is necessary that its civilians keep seeing its value. That Donald Trump, a leader with strong autocratic tendencies is now the president of the United States is not only due to the fact that many voters have fallen for his autocratic rhetoric but also, and I think more worryingly, due to the fact that the majority of the American electorate has not voted.

Whoever does not use democratic rights risks losing them. Democratic rights are like muscles. You need to use them in order not to lose them. Once you lose them perhaps your only hope can be that the international community will help you regain them. But using your democratic rights you can try to help achieve a society in which citizens are (even) more wealthy, healthy, free, satisfied, and well educated and which is may become an even better partner in the international community.
autocracy democracy Enlightenment muscle press religion rights secularism separation of powers