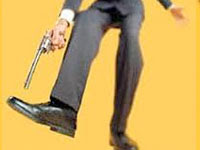 When we learn to understand that abilities and traits can be changed by effort, strategy and help, our fear of challenges and failure will becomes less as will our tendency to self-handicap.
effort fear mindset obstacles self-handicapping