In a review of Steven Pinker’s The Better Angels of Our Nature, Bill Gates said that the book "stands out as one of the most important books I’ve read – not just this year, but ever". Who am I to disagree? The book is an unbelievably rich resource documenting the steady decline of violence throughout history. To get an impression of how strong this decline has been, take a look at this graph. 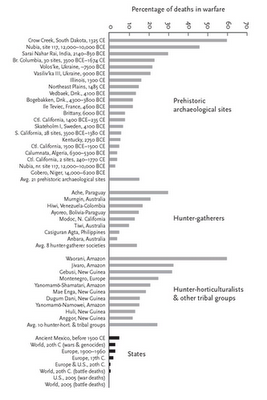 I came across countless things I did not know. I did not know how pervasive this decline of violence was, let alone that I had any idea about why this was so. The famous German philosopher Immanuel Kant (1724-1804) formulated his ideas about this in his 1795 anti-war document "Perpetual Peace".

Sometimes philosophy is approached with some dedain by people claiming that it is just a waste of time. But propositions by philosophers can sometimes be tested systematically and that is what two political scientists, Bruce Russett and John Oneal, did with Kant's three conditions for perpetutal peace. They analyzed a huge database containing data about interstate wars using multiple regression. They found that 1) democracies are less likely to get into military disputes, that 2) countries that depended more on trade and the global economy, were less likely to have a military dispute, and that commerce has robust pacifying effects, and 3) that membership in intergovernmental organizations favors peace. They conclude that Kant got it right.
Author: Coert Visser