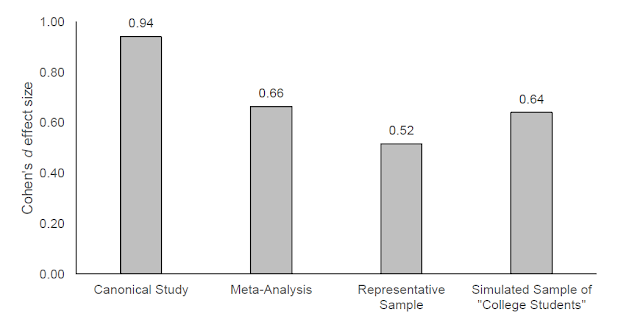 Abstract: For decades, social psychologists have collected data primarily from college undergraduates and, recently, from haphazard samples of adults. Yet researchers have routinely presumed that thusly observed treatment effects characterize “people” in general. Tests of seven highly-cited social psychological phenomena (two involving opinion change resulting from social influence and five involving the use of heuristics in social judgments) using data collected from randomly sampled, representative groups of American adults documented generalizability of the six phenomena that have been replicated previously with undergraduate samples. The one phenomenon (a cross-over interaction revealing an ease of retrieval effect) that has not been replicated successfully previously in undergraduate samples was also not observed here. However, the observed effect sizes were notably smaller on average than the meta-analytic effect sizes documented by past studies of college students. Furthermore, the phenomena were strongest among participants with the demographic characteristics of the college students who typically provided data for past published studies, even after correcting for publication bias in past studies using a new method, called the behaviorally-informed file-drawer adjustment (BIFDA). The six successful replications suggest that phenomena identified in traditional laboratory research also appear as expected in representative samples but more weakly, so observed effect sizes should be generalized with caution. The evidence of demographic moderators suggests interesting opportunities for future research to better understand the mechanisms of the effects and their limiting conditions.
Author: Coert Visser