When is leadership legitimate? 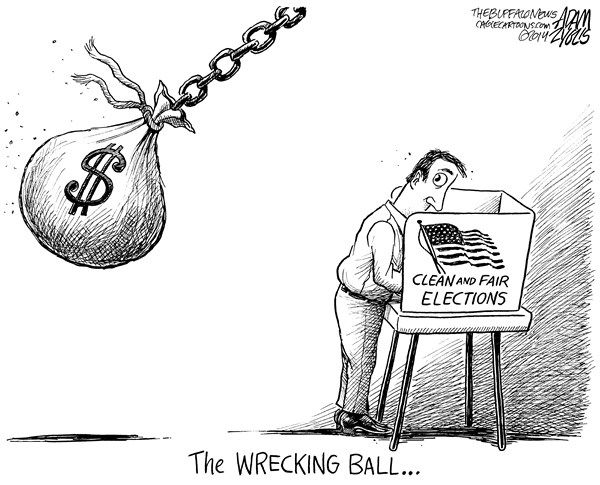 Below I'll try to answer two questions which I have thought about for some time. First, I'll say some things about the value of democracy. Are democracies better than non-democracies? I'll show why I think the answer is yes. Second, I'll share my thoughts on when leadership of countries should be considered legitimate. I think that two basic requirements need to be met for that. After having explained this, I'll share my thoughts on the legitimacy of the leadership of the next president of the USA.


Why the worldwide rise of democracy is a valuable thing

In his article Roser shows how the number of democracies in the world has slowly but surely been growing for the last 200 years, only to be temporarily interrupted by the two World Wars. He also shows that political freedom is a recent invention of humanity and that economic growth tends to precede democratization.

Democracy appears to be a good thing. Democracies are wealthier (with the exception of the fossil-fuel exporting countries), healthier, happier, and better educated. Also, human rights are better protected. While there is no firm evidence of causality, data suggest a causal link between level of education and democracy. That probable causal relationship is probably also bidirectional, because democracy appears to improve education as well.


How should we judge leaders?

With the above in mind we have some criteria for how we should judge leaders. Should we, by definition, consider it a good thing when a coup d'etat is prevented aimed at overthrowing a democratically chosen leadership which happened earlier this year in Turkey? Should we consider any elected president legitimate because he or she won the elections? Those questions confused me until I came up with the 2x2 matrix below which asks two important questions and, which I think, clarifies the matter somewhat:

If we apply these two criteria to the recent USA elections, it seems to me that there is reason for worry. While the USA is not an autocracy, there are serious reasons to say that it is not a full democracy either. A study by Princeton showed that "economic elites and organized groups representing business interests have substantial independent impacts on US government policy, while average citizens and mass-based interest groups have little or no independent influence."

Here are a few examples of how this could happen. One factor making this possible is the Citizens United law which allows big money to get a firm grip on nearly all candidates for the presidency (clear exceptions were Bernie Sanders and Jill Stein). This lead to the situation in which both final candidates were hated by a majority of the citizens while another candidate which appeared to have been effectively eliminated by his own party actually had views which reflected majority preferences (Sanders). Another factor is the role of the highly commercialized corporate media which gave one candidate extensive coverage while largely ignoring another candidate. Yet another factor is the process of gerrymandering which allows for the person who has won the popular vote by a large margin to lose the election. Taking all this in consideration, it is doubtful to say that the future president, Donald Trump, will have come to power democratically.

Will that person govern in a way which protects and strengthens democracy? Not likely. Already during the campaign he has shown explicit disrespect for the institutions on which a stable democracy is built. He has fervently attacked the press and keeps doing that. He has even intimidated and threatened individual members of the press for just being critical. He also, on many occasions, has shown disrespect for the constitution and the system of law (both national and international). Finally, he has shown disrespect for democracy itself, saying that the outcome of the elections should only be accepted if he would win. Also, at some point, he even suggested the elections should be cancelled and that the presidency should just be handed to him.

Are democracies to be preferred over autocracies? Yes. Is Trump's presidency legitimate? Hardly.