The important difference between emotional well-being and satisfaction with life 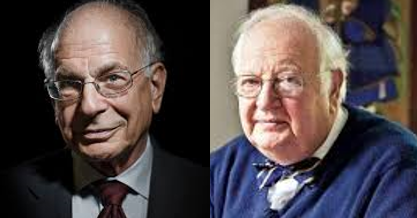 The happiness which you experience in a situation differs from how positive you think about the situation afterwards. In the same way, there is an important difference between experiencing emotional well-being and life satisfaction. Psychologist Daniel Kahneman and economist Angis Deaton (photo) have formulated important insights about these topics which I will try to summarize below.

Previously made points about happiness

In previous posts I have made some points about the concept of happiness. In this post I wrote that optimal happiness is better than maximal happiness, that it can be hard to assess your own happiness, that both whether you are happy and how happiness is associated with other factors depend on the context within which you live, and that self-reported happiness is weakly correlated to how one behaves. In this post I cite research which shows that people's self-reported happiness scores sharply differ from what these same people had said about their lives in interviews. In the interviews they were, in general, much more negative about their lives than their happiness score would suggest. In this post I describe research which shows that there is much disagreement in psychology about what well-being is and how it can be measured.

The difference between experienced happiness and remembered happiness

To, perhaps, confuse things even further, I would like to explain what Daniel Kahneman and his colleagues have discovered about happiness. Kahneman says that there is an important difference between being happy in your life and being happy about your life. The first is what he calls experienced happiness, the latter is what he calls evaluated happiness. The first kind of happiness is enjoyed by the experiencing self, the second kind by the remembering self. The happiness of the experiencing self consists of positive emotions which are experienced in a situation. The happiness of the remembering self consists of the 'story' which you tell yourself afterwards. That these two types of happiness are quite different might, at first glance, seem surprising but research shows that they are.

The peak-end rule and duration neglect

Fredrickson & Kahneman (1993) found out that people who have gone through a pleasant or unpleasant experience, afterwards tend to have a distorted picture of how positive or negative the sutation was. How they remember the situation afterwards to a large extent follows what is now called the peak-end rule. What strongly impacts their evaluation is the peak (the most plesant or unpleasant part of the experience) and the ending (a pleasant ending causes a more pleasurable remembrance and vice versa). How they will evaluate the experience is to a lesser extent influenced by how long the experience lasted (this effect is called duration neglect). This leads to strange differences between the experiencing self and the remembering self. The picture below shows the pain levels and duration of patient A and B.

It is very clear that patient B has suffered more and longer than patient A. But afterwards patient A turns out to have a much more negative remembrance of the event. The duration has little impact on the remembrance, the peak and end have a great impact. That is why A is more negative. The crazy thing about this is that if the treatment of patient A had been prolongued by adding some mild pain, the patient's memory of the event would have most likely been less negative.

The Easterlin paradox: is economic growth irrelevant for more happiness?

This distinction is important for the familiar question whether money makes you happy. The economist Easterlin (1974) formulated the following paradox: within a country, people with more money say they are happier but it is not true that people in richer countries report more happiness than people in poorer developed countries. On these grounds you might conclude that further economic growth is pointless in developed countries (as Easterlin did), at least in the sense that its citizens will not become happier by it.

But Kahneman & Deaton (2010) demonstrated that things are a bit more subtle. They found that further income growth from a certain point on, does not contribute to further emotional well-being (the experiencing self's type of happiness), but it does contribute to evaluated happiness (the remembering self's type of happiness). This is the case both at the individual level and at the level of nations. With nations too, further income growth (GDP) above a certain level, does not contribute to emotional well-being but it does contribute to evaluated well-being (Stevenson & Wolfers, 2008). This resolves the Easterlin paradox.

Life satisfaction is a more useful indicator than emotional well-being

Wealth does not protect from negative feelings and is no prerequisite for positive feelings. Even in the harshest conditions, people, through adaptation, are capable of experiencing positive emotions. But despite this fact, they will be much less satisfied with their lives. Material well-being does affect how satisfied people tend to be with their lives. Deaton (2015) argues that life satisfaction, therefore, is a much more useful indicator of general well-being than emotional well-being is.
Angus Deaton Daniel Kahneman duration neglect Easterlin paradox emotional experienced Happiness life satisfaction Money peak-end rule remembered resolved well-being