How to detect nonsense! 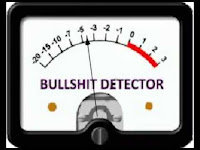 Below is a brief description of indicators that should be useful when separating sense from nonsense.

Nonsense indicator 1: personal beliefs and biases drive the conclusions
Everyone is biased to a degree. That is, if they have any knowledge in a specific area. Nonsense claims are often heavily persuaded by personal biases and beliefs. Scientists recognize their biases and personal beliefs, and use scientific processes in order to minimize the effects. Scientists, much like non-scientists, often find themselves looking for confirmatory evidence. “[A]t some point usually during the peer-review system (either informally, when one finds colleagues to read a manuscript before publication submission, or formally when the manuscript is read and critiqued by colleagues, or publicly after publication), such biases and beliefs are rooted out, or the paper or book is rejected for publication.” (Shermer, 2001, p. 22). Nonsense claimants often fail to recognize their biases (consciously or unconsciously) and thus make little effort to prevent this from influencing their claims.

Nonsense indicator 2: excessive reliance on authorities
A large portion of what we learn comes from authority figures (including teachers, authors, parents, journalists, etc.). Often, the authority provides accurate information. The problem occurs when we begin to rely too heavily on authority. Authority may provide a hint to what’s right, but authorities are fallible. Authorities often assert different beliefs. Which authority is right? They may both be so-called experts! Authorities too are susceptible to a range of conscious and unconscious biases, they make mistakes, and often have vested interests just like non-experts.

Thoughts on Authority
Perpetuators of nonsense sometimes prefer authority claims to evidence. I am sure you have heard it before my doctor says, my preacher says, my coach says, etc. The only real authority in science is the evidence.

Nonsense indicator 3: use of logical fallacies (common fallacies of logic and rhetoric)
Those making nonsense claims often present bad arguments. I am not saying that evidence based information is not also sometimes presented by using fallacious arguments. It is probably not as likely to occur when evidence exists for a claim. However, some are just not very good at arguing, so they may be asserting a true claim, but lack the argumentative skills needs to present a logical argument.

References are available upon request The complete Nonsense Detection Kit is featured in the book- In Evidence We Trust: The Need for Science, Rationality and Statistics. http://maxcondition.com/store-2/

Jamie Hale, M.S. is associated with Eastern Kentucky University's Psychophysiology Lab and Perception & Cognition Lab. His current research interests are scientific cognition, memory and eating behavior. He has written for numerous national and international publications. He is the author of In Evidence We Trust: The Need for Science, Rationality and Statistics. To learn more about Jamie visit his sites www.knowledgesummit.net and www.maxcondition.com. To hire him for lectures send him an e-mail (Jamie.hale1@gmail.com).