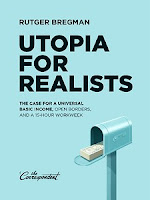 Rutger Bregman is an interesting author to follow. A few years ago he wrote a book about the history of progress in which he described how views on progress have developed over time. In that book he concluded that every civilization needs a belief in progress and that in our time we need to revive that belief. In his new book, Utopia for realists, he builds on that view.

He explains that we live in time in which we are well off. The past few centuries have brought us unbelievable progress in many ways. Medieval dreams of Cockaigne, the land of milk and honey, have come true. At the same time, many people are pessimistic and lack a sense of meaning in their work and life. According to Bregman this is mainly due to our not being able to imagine a much better future. He thinks it is essential that we start to have Utopian dreams again, to start yearning for a world which is much better than ours. This, he thinks, will enable us to experience meaning in our work and life again.

After having laid out this vision Bregman describes what he views as some pillars of this new utopian world. He elaborates six steps to this better world: a 15 hour work week, universal basic income, the eradication of poverty, the development of new system of taxation, new definitions and ways of measuring societal progress, and a world with open borders.