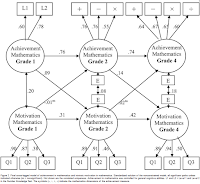 There is a lot of interest in intrinsic motivation. We are intrinsically motivated when we are doing things that interest us and that we enjoy. These are activities for which we do not have to be encouraged. Encouraging or rewarding people for doing something for which they are already intrinsically motivated can even less that intrinsic motivation. What you find interesting, by the way, is not fixed. It can and will keep on developing. The reason is that when you are busy doing what you find interesting you will encounter new information and new questions which may renew and strengthen your curiosity and interest.


Intrinsic Motivation and Achievement in Mathematics in Elementary School: A Longitudinal Investigation of Their Association
Garon-Carrier et al. (2015)