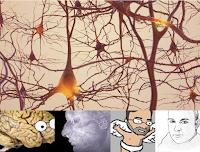 Neuroskeptic, acknowledges, in his post The limits of neuroplasticity (2010), that our brain is plastic but points out that this plasticity has limits. He illustrates this point by reviewing the article Growing up with bilateral hippocampal atrophy: From childhood to teenage. It is interesting that in 2011, he has written a post called Neuroplasticity revisited in which a case is described of a patient who lost large parts of her orbitofrontal cortex and ventromedial prefrontal cortex. After 1 year this patient had only made limited progresss but a follow up assessment after 7 years showed she was much improved. Neuroskeptic says: “I’ve previously been skeptical of some of the stronger claims of neuroplasticity or “brain remodelling”, but some parts of the brain are more plastic than others and the prefrontal cortex seems to be one of the most flexible.” A few years later, in a tweet, he says: “Neuroplasticity is a fascinating biological process but some people are basically making it into a religion.” What he precisely means with this and why he says it is not clear to me.

Several other skeptical reactions target specific authors, especially Norman Doidge, who wrote two bestsellers about neuroplasticity. Mo Costandi, a science writer who was trained as a neuroscientist, sometimes also expresses himself skeptically (/cynically) about claims about neuroplasticity (for example here, here, and here). It's a pity I can't find his explanation of why he says things like ‘sounds like BS’ and ‘sounds really, really bad’. I do think he's right in implicitly warning about mixing science and commerce. PZ Meyers, a biologist who often expresses cynical views on a range of topics, writes in his post The neuroplasticity bait-and-switch, that the abuse of the term neuroplasticity often irritates him. He is especially angry about an interview with Norman Doidge (who, he says, is ‘full of shit’). He is angry about the suggestions that neuroscientists think that the brain is essentially fixed and unregenerative because, he says, the opposite is true. He says that the idea that the brain changes is not new but insight into how this precisely happens, is. Then he characterizes Doidge's approach as a "think yourself better" approach and he says that Doidge conflates the scientific understanding of neuroplasticity with his brand of quackery and hype and he calls Doidge a quack.

I will try to do justice to these criticisms and summarize them below. I will also add my brief comments.

2. Journalists and authors often refer to neuroplasticity without mentioning which type of neuroplasticity they mean. My comment: I can only agree. When reading claims about neuroplasticity, I recommend to always ask yourself: what is precisely meant and what is the evidence for the claim?

3. The suggestion that the concept of neuroplasticity is new, is untrue. My comment: okay.

4. The suggestion that neuroscientist have long thought and still think that the brain can't change, is untrue. My comment: I agree. But the world contains more people and professionals than neuroscientists. What doctors, coaches, therapists, and laypeople think about the plasticity of the brain is also important.  My experience is that many people are still unaware of the reality of neuroplasticity. A small example: I received an email by an 'expert in talent development', who literally wrote: "That after age four new connections (synapses) in the brain could develop ....? From what I have understood this is, from a biological perspective, only possible to a very limited extent."

5. Neuroplasticity has limits. My comment: of course. Who claims otherwise?

6. Norman Doidge is not the person who discovered neuroplasticity. My comment: I may be wrong but I don't think that Doidge or anyone else has ever claimed that he was.

7.  Some skeptics think there is a hype around the concept of neuroplasticity and warn against quackery, commercial abuse and the selling of false hope. My comment: good points although the criticisms which I have seen are not very specific and sometimes have an emotional undertone which make them less convincing. I much agree with the warning against mixing science and commerce. While I do not yet have a crystallized view on what the relationship between science and commerce should look like, I do agree that mixing the two may undermine science and can harm patients. I do agree that in some cases false hope may be sold but would like to point out that it is also possible to sell false despair (which may be a greater problem).