The combination of critical thinking and hope

An  interesting new article by Maria Popova (photo) contains some valuable insights. One phrase which struck me was: "The assumptions people make about the motives of others always reveal a great deal more about the assumers than the assumed-about." Another one which I like is: "But evil only prevails when we mistake it for the norm." 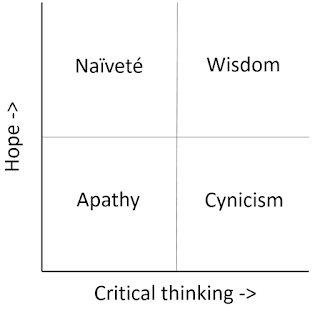 Now that I have written this, I'm contemplating the word wisdom. Do wise people indeed combine critical thinking and hope? Which people pop to mind when I am thinking about wisdom? The first examples are: Gandhi, Mandela, and King. All three of them combined critical thinking, which was expressed in their resistance to the established (oppressive) order with hope ("I have a dream").