Mindfulness meditation (MM) leads to many health benefits. It now begins to become apparent that this is mainly due to a reduced stress experience.

Previously I wrote about the emerging research into the health benefits of MM. That MM has health benefits has become clear from overview studies like this one and this one. There is also research which shows that MM leads to structural (anatomic) changes in the brain, such as this study (thickening of the right insula and somatosensoric cortex), this study (forming of gyri), this study (higher density of grey matter in the hippocampus, the posterior cingulate cortex, de temporo-parietal junction and the cerebellum), this study (looser connections between the dmPFC and the insula and amygdala). Also, there is research which shows that MM reduces blood pressure and the experience of stress. Taken together, studies such as these suggest that MM causes all sorts of good things to happen but there is no clear overarching theory about how MM triggers these positive effects.

Researchers Creswell and Lindsay (2014) have come up with such an attempt to provide an integrative explanation of MM's effects. They have developed a model which suggests that MM mainly improves health by reducing stress. Under stress the activity of a person's prefrontal cortex (which is important for thinking and planning) is reduced while at the same time the person's activity in structures like the amygdala, the hypothalamus, and the anterior cingulate cortex (areas involved in activating the stress response) are increased. Excessive and chronic stress increase the risk of health problems such as heart diseases and depression. MM, according to the authors, in essence does two things which explain its effectiveness: (1) increasing the activity of neuronal pathways in the brain involved in regulation, (2) reducing the activity in the brain of pathways in the brain involved in stress-reactivity. The figure below shows their model (more details can be read in the article): 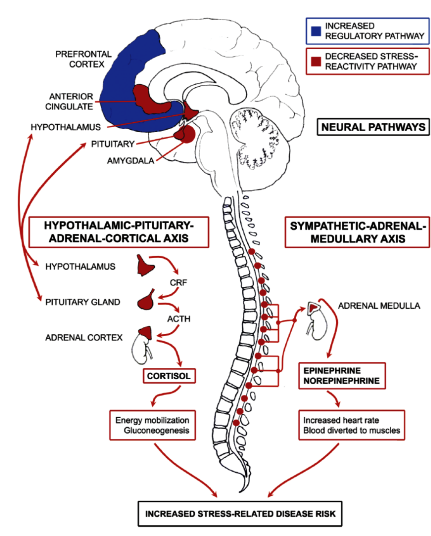