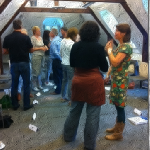 Nowadays, in our training courses, we often work with what we call an introductory reception. We do this introduction exercise right after we have done a brief getting-into-it exercise. We ask the participants to stand up and we give them the following explanation of what we are going to do:


"Could you walk up to another participant whom you are curious about and exchange two things with that person? First, who you are and what you do, and second, how it was to do that little conversation you have just done [the getting-into-it exercise]. We are going to do this process three times so that you already will have the opportunity to get to know a few other participants. You will get to know the rest of the participants later because we are going to practice a lot with each other, today. So, please, walk up to a participant you are curious about and go ahead."

The exercise supports the three basic psychological needs of people (need for autonomy, competence, and relatedness). They can choose themselves with whom they will talk and what will say, they can tell about what they do professionally and find interesting, and they can make a connection and be active.
Author: Coert Visser