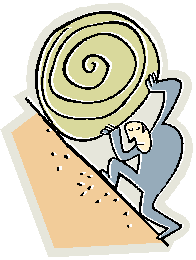 A few days ago I spoke to a manager who told me that she had had a conversation with a subordinate in which she had communicated some clear expectations she had of him. She told me that she had found it quite hard to prepare for the conversation. In this conversation she had used our technique of progress-focused directing. With this approach you formulate very specifically what you expect of the subordinate (this is called your expectation) and you give a clear reason for your expectation (this is called the rationale). This manager told me that, during her preparation, she had found it hard to formulate the rationale. She said she had made it quite difficult for herself and that she made her rationale very complex at first. Only at the end of her preparation she had managed to formulate her rationale in a brief and simple way. When she told me this, I asked her whether the conversation had led to the desired result. She said it had and added: "But I wonder why I make things so hard and difficult during my preparation."

I replied that I thought it can be quite normal to have to think hard to prepare for a challenging conversation. Formulating a clear rationale can require some hard thinking. This kind of hard work can increase the chance that your conversation will go well. The employee will understand better what it is your asking and why your asking it. This conversation with this manager reminds me of something which often happens. We often have to work hard and struggle to get better at something and to get good results. But sometimes it feels like we are the only ones who have to work so hard. Sometimes it seems like other people achieve the same things effortlessly. But this is an illusion.

Bob Dylan once expressed his admiration for Paul McCartney in the following way: “He’s about the only one that I am in awe of … I’m in awe of him maybe just because he’s just so damn effortless.” Effortless? Really? Did Bob miss the fact that McCartney has been practically immersed in music for all of his life and always has been deliberately seeking for musical innovation? From many other artists it is also thought that they have achieved their art effortlessly. Mozart is an example of such an artist. But Mozart himself said: “It is a mistake to think that the practice of my art has become easy to me. I assure you, dear friend, no one has given so much care to the study of composition as I. There is scarcely a famous master in music whose works I have not frequently and diligently studied.”

What is the reason that we may think that other people accomplish greatness without effort while we have to struggle and plow? The most important reason for this, I think, is that we are witness of our own struggles but not of the struggles of other people. We generally are only witnesses of the results of other people's struggles. When we visit a concert we see someone perform who (hopefully) gives a flawless performance. We don't know how long and hard this person has had to work for his art. But actually we should know. Anyone who wants to get real good at something will have to work real hard. This process of practicing can be frustrating but is necessary (see the work by Anders Ericsson).

In short: if you find yourself despairing about why you have to work so hard while other people don't seem to have to, remember that you are probably falling prey to an illusion. Other people have to struggle and fight, too. But you weren't there when they did which makes it seem like they didn't. But they did. If we want to get real good at something we have to work real hard.