P-Curve Analyses: Finding out which Social Priming Effects are Likely to be True

Professors are Not Elderly: Evaluating the Evidential Value of Two Social Priming Effects Through P-Curve Analyses

Abstract: It is possible that the number of false positives in the literature is much greater than is desirable due to a combination of low statistical power, publication bias, and flexibility when analyzing data. Recently, some researchers have argued the replicability crisis social priming research is greatly exaggerated (Dijksterhuis, 2014; Stroebe & Strack, 2014). To quantify the extent to which researcher degrees of freedom are a real problem, I present two p-curve analyses that examine the evidential value of research lines on professor priming and elderly priming. The results indicate studies examining elderly priming are p-hacked, while studies examining professor priming contain evidential value. I believe a polarized discussion about whether social priming is true or not, whether direct replications or conceptual replications are preferable, or whether methodological rigor or theory development is needed is unlikely to lead to scientific progress. Instead, we have to meta-analytically evaluate individual effects based on their evidential value, and collaboratively examine what is likely to be true. Read full paper here.
Author: Coert Visser No comments: 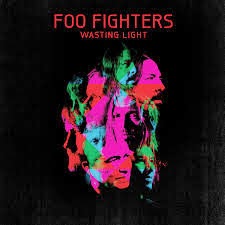 I am often intrigued by the complexity and paradoxes in optimal human functioning. One thing which interests me in particular is that our performance may sometimes be improved by deliberately adding constraints to the circumstances in which we have to perform. I came across nice example when I was watching Back and Forth about the rockband Foo Fighters. Just before starting to record the 2011 album Wasting Light, Foo Fighters front man Dave Grohl decided that instead recording the album digitally they would record it on tape. This implied that the recording process would be harder and less flexible. While digitally recorded music can be easily manipulated and corrected, analogously recorded music can't be.

Grohl realized that the easiness of digital recording might make musicians a bit lazy and easy. After all, any mistake could be relatively easily corrected. But analogous recording would require the band members to be really sharp and play really well. While we can't know how and to what extent this contributed to the album's succcess, we can say the album was indeed a success. It became their best sold album and won five Grammy Awards.
Author: Coert Visser 2 comments:

This blog, The Progress-Focused Approach was featured on the recently launched list of Top Psychology Blogs on Psychology Degree 411. It landed on #13 in the list. See the list.
Author: Coert Visser No comments:

Interview with me about psychology 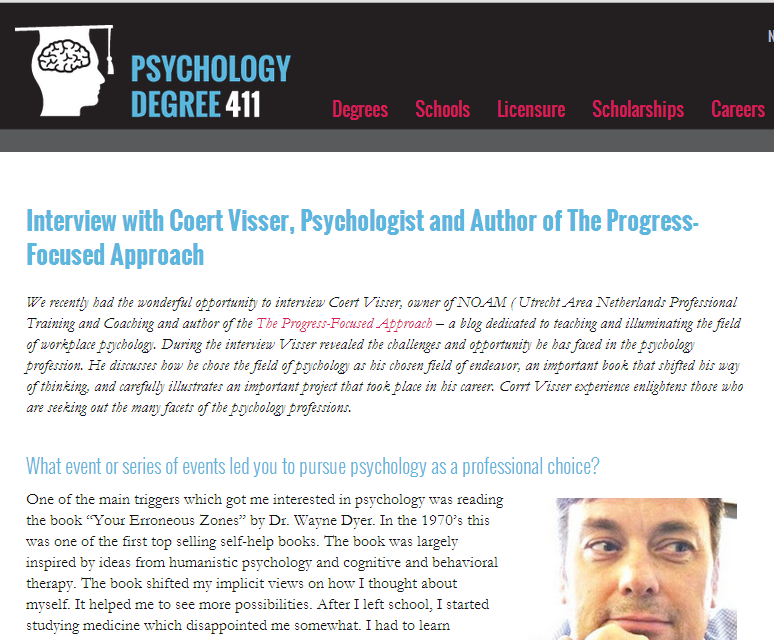 I was interviewed for a website for aspiring psychologists about my experiences as a psychologist and my views on my profession. You can read it here.
Author: Coert Visser No comments: 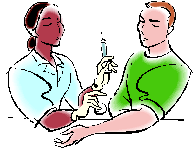 Abstract: Prosocial behavior is a central feature of human life and a major focus of research across the natural and social sciences. Most theoretical models of prosociality share a common assumption: Humans are instinctively selfish, and prosocial behavior requires exerting reflective control over these basic instincts. However, findings from several scientific disciplines have recently contradicted this view. Rather than requiring control over instinctive selfishness, prosocial behavior appears to stem from processes that are intuitive, reflexive, and even automatic. These observations suggest that our understanding of prosociality should be revised to include the possibility that, in many cases, prosocial behavior—instead of requiring active control over our impulses—represents an impulse of its own.

In praise of high-level cognitive control when performing complex tasks 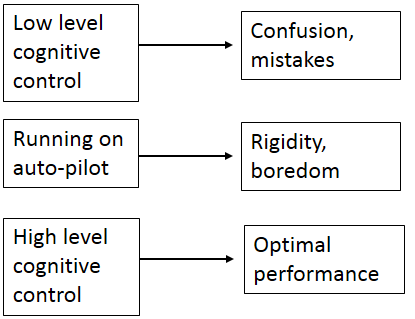 In Going from Good to Great with Complex Tasks, Ozgun Atasoy explains that the belief that consciously thinking about what we are doing, when performing complex tasks, by definition harms our performance, is wrong. It is true that some type of conscious thinking can harm our functioning. For example, when we are typing on a keyboard, we run largely on auto-pilot. If we would try to consciously control the typing of each separate letter, this would slow us down a great deal and probably cause us to make many mistakes.