Is there room for punishment in progress-focused work?

Punishment and the progress-focused approach do not seem to fit well with one another. An example: the progress-focused approach assumes a growth mindset, the belief that people can change and grow by putting in effort. Research has shown that people with a growth mindset are less inclined to label, stereotype, and punish people. 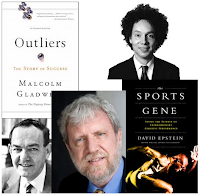 Malcolm Gladwell, who has lately been criticized about his book Outliers, in which he wrote about the 10,000 hours rule, has written as response in which he defends his position. In his piece, Complexity and the ten-thousand hour rule, he mentions the origin of the the 10,000 hour figure, which was a publication by Herbert Simon and William Chase, who estimated that the best chess players spent perhaps 10,000 to 50,000 hours staring at chess positions.

Then, Gladwell mentions the work by John Hayes, who found out that the best classical composers in all but three cases did not create their greatest work until they had been composing for at least ten years. Gladwell goes on to explain that in Outliers he explicitly mentioned the essential role of several other factors besides practice to achieve elite performance. First, he explicitly acknowledged the role of talent; second, he mentioned that elite performers invariably had access to lucky breaks or privileges or conditions that make all those years of required practice possible.

Gladwell goes on to discuss one of the more thoughtful critics of his book and thus on the work of Anders Ericsson which is an important pillar on which the book is based, David Epstein's new book The Sports Gene. Epstein acknowledges the important role of deliberate practice but says that there is considerable variation in the number of hours required to achieve elite performance. He mentions examples of individuals who have reached the top in their game in substantially fewer hours. Also, he argues that a slow runner will never become a fast runner. He argues that some people are naturally gifted for sports and therefore need fewer hours of practice.

Gladwell has two points of criticism to Epstein. First, he says that some examples in the book in which the performer needed fewer hours of practice do not really seem to be examples of elite performance. Second, he points out that Epstein may have built a straw man argument. That someone who is not a fast runner may not be able to become a fast runner does not undermine the essence of what Simon and Chase, Anders Ericsson, John Hayes, and Gladwell have been writing about. Running in a straight line is quite a different task than composing a symphony. The '10,000 hours writers' have particularly referred to cognitively demanding fields.

My take on this: I agree that critics of Gladwell and Anders Ericsson often use strawman arguments. They incorrectly represent the case of the author and then criticize this incorrectly represented case. I think this is especially so in the case of Anders Ericsson (see for example this post). 10,000 hours is not a magical number for several reasons:

We should become less neuron-centric

Mo Costandi, author of 50 Human Brain Ideas You Really Need to Know, has written an interesting new article: A new way of thinking about how the brain works. In this article he says that a dominant way of thinking about the brain, namely that it is basically a network of cells. A bit more specifically, Costandi speaks of the Neuron Doctrine which states that: 1) the neuron is the fundamental structural and functional unit of the nervous system; 2) neurons are discrete cells which are not continuous with other cells; 3) the neuron is composed of 3 parts – the dendrites, axon and cell body; and 4) information flows along the neuron in one direction (from the dendrites to the axon, via the cell body).

While this is the dominant way of thinking about the brain, according to Costandi, it is largely wrong. In particular, the first point is wrong. He says that neurons are only half the picture. Non-neuronal cells, which are collectively known as glia, of which there are three types - astrocytes, microglia, and oligodendrocytes - which where thought to play a mere neuron- supporting role actually play a far more important role in proper brain function and information processing than was previously thought (I mentioned this before in this post).

When thinking about the brain, we should become less neuron-centric.
Author: Coert Visser No comments:

The well-known research by Barbara Fredrickson and Marcial Losada on the positivity ratio is now being seriously criticized. Their 2005 paper Positive Affect and the Complex Dynamics of Human Flourishing claimed that the amount of positive affect one experienced divided by the amount of negative affect, affects the degree to which one flourishes.

When the amount of positive affect is three of more times as much as the amount of negative affect, the authors said, a tipping point is achieved above which flourishing begins.

The authors of a new paper, The Complex Dynamics of Wishful Thinking: The Critical Positivity Ratio,  claim that the research by Fredrickson and Losada is built on quicksand because it contains fundamental conceptual and mathematical errors. In this article your can read more: The Magic Ratio That Wasn’t.
Author: Coert Visser 6 comments: