There is nothing inevitable about high crime rates 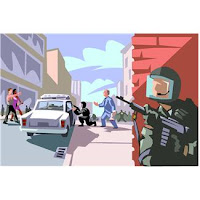 As I said in this post, high crime is a badly underestimated problem which does more damage than most people realize. There is not only direct damage but also hidden material and immaterial costs and the problem that crime is itself criminogenic, in other words crime leads to crime (having been confronted with crime increases your likelihood of becoming criminal).

Two sets of beliefs may stand in the way of bringing down high crime rates: 1) the belief that high crime is an inevitable by-product of modern societies, and 2) that drastic, large scale change is needed before crime can be brought down. The belief that high crime rates are inevitable in our societies prevents us from even attempting to bring down crime rates.
One manifestation of such a fatalistic belief is the belief in the waterbed-effect, which says that if you bring down crime at one place, it must pop-up in another place. This belief implies that the amount of crime is unchangeable; it can only be moved to another location. The belief that drastic change is needed before one can expect drops in crime rate is also a discouraging thought. If it were the case that social problems like poverty, ethnic participation and integration, and drugs related problems would first have to be solved before crimes could be brought down, the question would be what that would cost and how that could be accomplished, how much time that would take (and whether it could be done at all).

A new article, How New York Beat Crime, shows how New York has achieved dramatic reductions in crime. The keys to these accomplishments were: 1) more police, and 2) more effective policing strategies (better information and more focused and aggressive). I especially like this quote: "So where have all the criminals gone? Many of them just seem to have given up on breaking the law."


It is important for all of us to realize this: there is nothing inevitable about high crime rates.
Author: Coert Visser