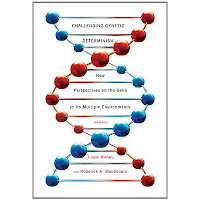 I have written a few posts before about how the old view of genetic and environmental influence on behavior isn't valid. In Bye bye genetic determinism I wrote about Chapter 2 of David Shenk's The Genius in All of Us: Why Everything You've Been Told About Genetics, Talent, and IQ Is Wrong. It said that the popular conception of the gene as a simple and powerful causal agent is not valid and should be replaced by a new interactionist model which describes the role of genes more accurately is briefly summarized as 'GxE'. In Exit genetic determinism: example of genes-environment interaction I summarized a dramatic demonstration of this genes-environment interaction which dates back to 1958 when researchers Rod Cooper and John Zubek did an experiment with rats.

A new book, Challenging Genetic Determinism. New Perspectives on the Gene in its Multiple Environments, reports on advances in genetic research. Here are some quotes from the book: