Objective reality as an asymptote

Also read: On the importance of evaluating truth claims

To my post On truth: we can distinguish between false and falser, I received several responses. One response contained the following statement: "For what I understand of radical constructivism (thinking I am one), reality is not denied (this is another thing). It's just that "true reality" cannot be objectively known, for there's always a subject looking at it, either directly or through devices (scientific apparels). So, any view of reality is true in and for itself. Yet, that doesn't prevent people from talking about their differing views and coming to a consensus to what true reality (or reality "out there" as constructivists say) probably is. When everybody though Earth was flat, so it was. Yet, someday, someone experimented (and measured) that it was spherical. (personal) experience grounded that belief and we yet have to find someone who can prove that Earth is flat again (or cubic). So we trust that to such a high level that we relinquish doubt and consider that the earth reality out there is indeed spherical."

Here are my thoughts on this: I would not say "any view of reality is true in and for itself". I think any view may seem/feel true but this different (I think) from whether it actually is (or to which extent is actually is). In the same vein, instead of saying "When everybody thought Earth was flat, so it was.", I would say "Although everybody thought Earth was flat, it actually wasn't." Although it may have not mattered much to most people whether or not it was flat, and they may have treated the earth's supposed flatness as truth. This, however, did not reflect the reality of the shape of the earth which wasn't flat.

I would also not say that "true reality" cannot be objectively known". While I agree that we may never be able to understand everything about reality, I would rather not think about this in dichotomous terms (can we or can we not know true reality objectively?). Instead, I am arguing for a more continuous view on this in which we distinguish between views or claims which are more or less true or false. We can rather objectively say that the earth is not flat, that we understand how life evolves, etc. This type of thinking about what is true seems especially relevant when you are a scientist. But I also believe in the relevance of social science which also goes beyond the purely subjective experience and beyond 'what can we agree on?'. I am not saying that 'truth' in the sense that I am talking about here is always important to talk about. Often, it is not important at all. In many cases a pragmatic approach of: "what seems to work here?" is more interesting. My original statement was that it seems unwise to me to ignore both aspects of rationality (what is true? and what works?).

Another response came from a math teacher who is also a math student. She read this part of my post: "The claim that the earth is flat is much more wrong than the claim that it is a sphere. To say that the earth is a sphere approaches reality much closer than to say it is flat as can be empirically tested. If we say that all claims are equivalent, there would be no measure of progress anymore, there would be no need for evidence and science anymore, and the whole notion of education would collapse. To deny that one claim could be further from the truth than another would be to say that anything goes.", and said: that is just like an asymptote, isn't it?

My response: Yes, I think comparing this to an asymptote is interesting. In analytic geometry, an asymptote of a curve is a line such that the distance between the curve and the line approaches zero as they tend to infinity. In the figure below the dotted line is the asymptote. As you see, the curve is approaching the asymptote closer and closer. This is an interesting metaphor for how knowledge may develop. The asymptote reflects the true state of nature, reality as it is, independent of our interpretation of it. 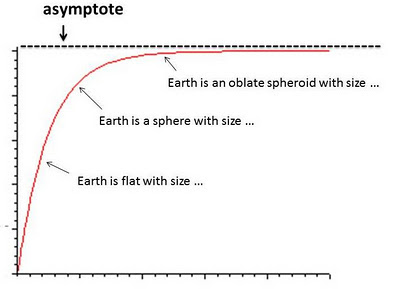