Developing a Growth Mindset - How individuals and organizations benefit from it

Does success or failure depend on whether you do or don’t happen to have some or other fixed talent? Is it true that you either have talent or you haven’t? How are these questions relevant for organizations? This article is about the importance of the growth mindset, the belief in the mutability of human capabilities by effort and experience. A lot of evidence shows that the belief in the changeability of capabilities is an important condition for that change. This belief turns out to be realistic. Anything that people do can be seen as developable skills. What does this insight imply for how we manage and educate people? How can in we, in our organizations, develop a growth mindset culture?

Which belief people have turns out to have important consequences. Research shows that people with a fixed mindset with respect to a certain capability develop a focus on proving that they have this capability rather than on the process of learning. They disregard the process of learning which, of course, impedes their growth and functioning. People with a growth mindset, on the other hand, develop a tendency to put effort into learning and into developing strategies that improve learning and long-term performance. The table below summarizes the main differences between a fixed mindset and a growth mindset which research has revealed. 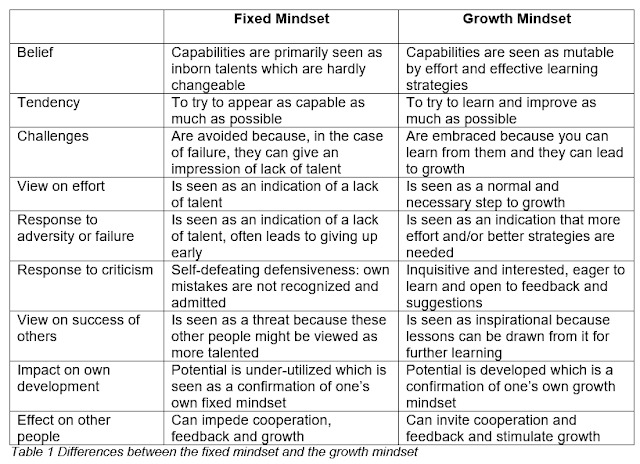 Teaching a growth mindset
That having a growth mindset has important benefits may raise a few questions. Are people with a fixed mindset predisposed to think that way or can a growth mindset be taught? If a growth mindset can indeed be taught, is it hard to do so? How do you do it? Several researchers have developed growth mindset workshops and studied their effects. These studies show that even brief growth mindset workshops establish enduring changes in attendants’ mindsets (Aronson, Fried and Good, 2002; Heslin, Wanderwalle and Latham, 2006). These brief mindset workshops may be structured as follows:
Aronson et al. (2002) did a workshop with students and noticed how this led to an important change in how these students viewed school. Before the workshop, many students saw school as a place where you, as a student have to perform, and where the teacher judge you. After the workshop they saw school more as a place where you learn, with the help of the teachers, things that make you smarter. Also, they said that, while they were learning, they imagine how new connections in their brain were forming.

Research shows that the way in which we get feedback influences how we think about the mutability of our capabilities. Feedback often contains hidden messages that can either motivate or demotivate us. Positive feedback is often motivating for people and negative feedback can threaten people’s sense of competence and the relationship you have with them. Positive feedback supports people’s sense of competence and works motivating, and supports relationships and performance. 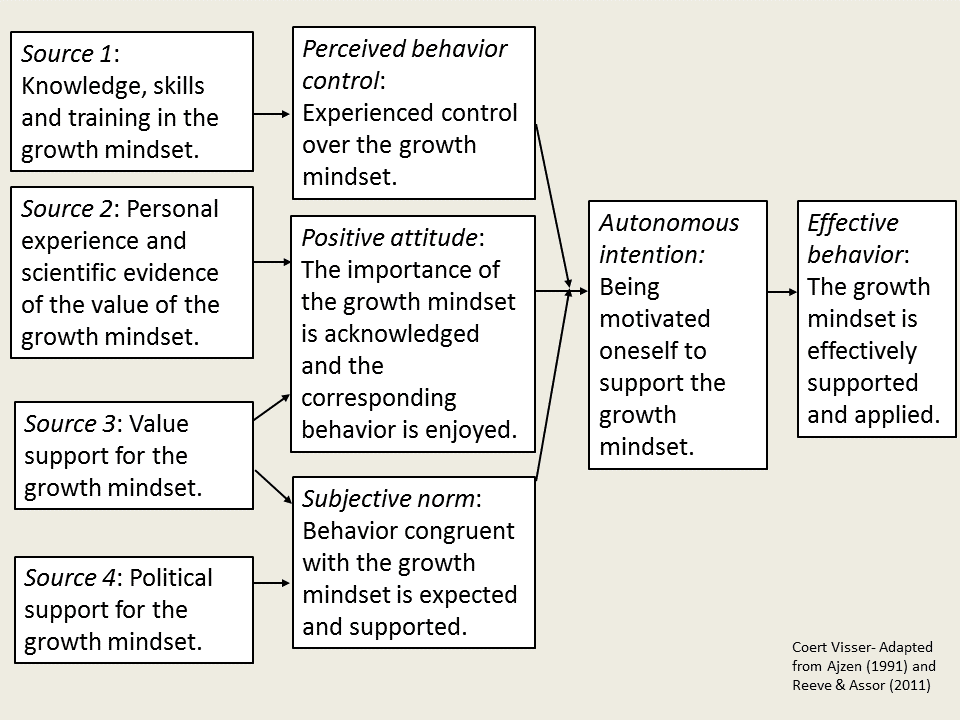 If organizations can build a culture in which the growth mindset represents the normal way of thinking this is likely to have many benefits, both for individuals and for the organization as a whole. A fixed mindset culture encourages internal competition, defensiveness and an emphasis on judging people, whereas a growth mindset culture encourages cooperation, openness and an emphasis on learning. The choice seems easy.