Challenging yourself as a teacher 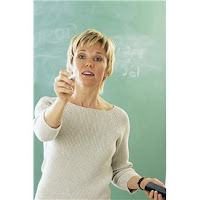 The need to remain challenged
Mihály Csíkszentmihályi introduced the concept of flow. In flow people are fully involved in an activity which helps performance and support growth and a sense of fulfillment. Flow happens when people have clear goals and when there is good balance between the perceived challenges of the task at hand and one's own perceived skills. When tasks are structurally perceived as too easy people tend to bored or apathetic. When tasks are perceived as too hard they tend to feel stressed and anxious.

Is teaching the same subject year after year bound to become boring?
What does this mean for the situation in which you are a teacher? As a teacher you are likely to be more knowledgeable or skillful than your students. After years of teaching the subject the subject itself may start to feel like too easy and you risk starting to feel apathetic or bored. You may not be able to make the subject itself harder because that would make it too hard and thereby stressful for the students. Is there a solution?

Making chess challenging when playing against a weak player
As an intermezzo, let's look at a father teaching his young son to play chess. After the father had taught his son the basics of the game they started to play games. At first, the father deliberately played extremely weak to let his son win, in an attempt to motivate him. After some time, the father wanted to provide a bit more challenge to his son. But he realized he could not play at his normal ability because his son, as a beginning player, would then never be able to win any match. So he thought of a different approach. In chess, each of the pieces has their own point value. For instance a rook is worth 5 points, a knight is worth 3 points. Without saying it to his son, the father gave himself the extra task of keeping a balance throughout the game. Whenever his son captured a piece worth 3 points, he had then to do the same and capture another piece worth 3 points back. This extra task made the game surprisingly hard again for the father who was genuinely challenged. Chess became perhaps equally challenging for both players who were of very different skill levels. This is just a simple example of how people may often regulate the complexity of their tasks themselves. Many situations offer endless opportunities for adding complexity to the task at hand.

Adding challenge to your task as a teacher in a way that benefits both you and your students
Experienced teachers can benefit from this principle so that their work never has to become boring. If you teach a subject which in itself is rather easy for you, you may add complexity in a way which is both useful for you and for your students. Here is an example. Mark Lepper and Maria Woolverton have studied highly effective tutors. One thing they found was that:


These tutors often manage to avoid ever saying explicitly that the student has made an error. Rather, in the face of an incorrect problem step or a mistaken answer to a question, these tutors are likely to pose a question that indirectly implies the existence of some error and, sometimes, the location of that error. Their goal is to prompt students into retracing their own steps and "catching" their own errors, while avoiding the negative motivational consequences of pointing explicitly to mistakes and failures on the part of the students.

Giving yourself the extra task of 1) not saying what the student has done wrong but 2) instead asking subtle questions which imply some error and 3) inviting the student to retrace his or her steps and catch their own error and improve their solution can make teaching surprisingly challenging no matter how easy the subject matter itself may be to you. If you try it I predict you won't be bored.
Author: Coert Visser