The New York Times reports on a project done at Google called Project Oxygen. The aim of the project was to find out what the best managers at Google do to have teams with individuals that perform better, are retained better, and are happier. The project team gathered more than 10,000 observations about managers — across more than 100 variables, from various performance reviews, feedback surveys and other reports. They then looked for some preliminary patterns in the data and formed hypotheses. Next, they gathered additional data by systematically interviewing managers to test these hypotheses. Finally, they analyzed these data and drew conclusions. The conclusions were summarized in 'Google's Rules' which consists of a set of eight good behaviors which are operationalized in behavioral terms and three pitfalls of managers. 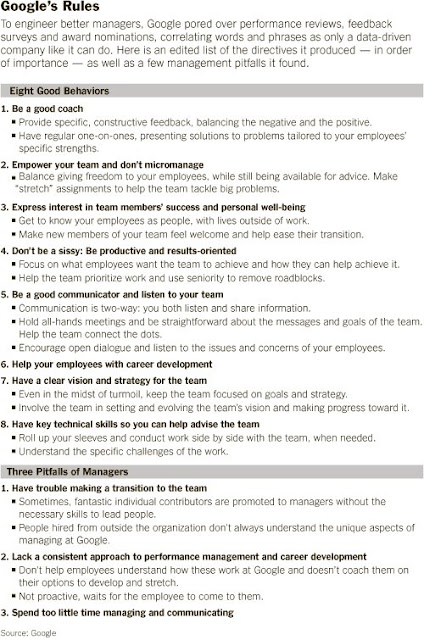 These conclusions were communicated throughout the organization and incorporated into various training programs. According to the article the impact of these activities on improving managerial competence has been good.

Question: What do you think about this research?
Author: Coert Visser