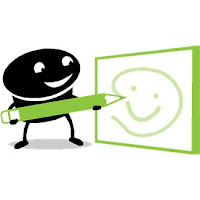 Supporting solution building process by eliciting positive behavior descriptions
SF co-developer Steve de Shazer wrote, in his classic publications Keys to Solution in Brief Therapy (1985) and Clues: Investigating Solutions in Brief Therapy (1988), that SF practitioners should help their clients create an expectation of beneficial change by getting a description of what they would do differently once the problem was solved. At the time, de Shazer did not support this claim with empirical evidence. Visser and Schlundt Bodien, (2009) provides evidence for each of the assertions made by de Shazer. Only part of the evidence presented here was already available at the time of de Shazer’s writing. Evidence is discussed from diverse lines of research like Fredrickson’s broaden-and-build theory, research on Winograd’s prospective memory, Jeannerod’s research on the perception-action link, and Bargh’s research on priming.

Activation of a behavior representation leads to actual behavior 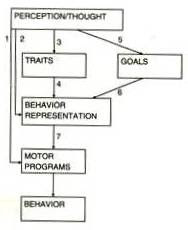 , Ap Dijksterhuis, Tanya Chartrand and Henk Aarts have written the chapter Effects of Priming and Perception on Social Behavior and Goal Pursuit. In it, they present a model which describes different pathways through which behavior is produced. As the picture on the right shows, the model distinguishes 7 separate paths. One pathway which is particularly interesting for solution-focused practitioners is number 7.

Here is a quote from the chapter which explains path 7: Jeannerod (1994, 1997) demonstrated effects of activated behavior representations on motor programs. He compared people imagining an action with people engaging in these actions (again, such as weightlifting, rowing, or running) and showed that under both conditions the same motor areas became active. Some sport psychologists have also used the EMG to show that imagining an action and engaging in an action often have the same neuropsychological consequences (Hale, 1982; Paus, Petrides, Evans and Meyer, 1993). This and other work led Jeannerod (1995) to conclude that "simulating a movement is the same as performing it, except that the execution is blocked" (p.1421). Recent research went even further and demonstrated that merely hearing a verb or retrieving a verb from memory activates corresponding motor representations (Jeannerod, 1999; Perani et al., 1999; see also Grezes and Decety, 2001). In sum, activation of a behavior representation (by thinking about it or hearing it) leads to activation of motor programs and to actual behavior.

Both the desired situation question and the past success question are examples of evoking desirable behavior representations. Once there are vivid positive behavior descriptions, the preparation of the execution of these very behaviors will automatically start.

Research: eliciting vivid descriptions of positive future events promotes a sense of competence
Recent research by Gamboz et al. shows how perspectives on the future and past are interrelated in our brains. The research shows that when we ask people to describe a future they base this description at least partly on memories of the past, which supports the claim that positive memories are building blocks of the desired future (also read Positive memories are building blocks of desirable future scenarios). The article also shows that people may confuse future scenarios and memories of the past. Respondents occasionally rated events which they had first described as future events in a follow up study as events that had already happened in the past (see The Role of Past in the Simulation of Autobiographical Future Episodes).

When solution-focused professionals ask clients to as vividly possible events in their desired future, and help them focus on what they concretely do in that scenario, clients often report that it feels to them as if, or almost as if, they have already done the behavior. The fact that they (almost) feel like they have already done the future activity, raises their feeling of competence. And in a sense, it is fair of them to feel they have already done the future behavior because descriptions of future scenarios are built by using memories as building blocks. The interesting thing is, by eliciting vivid examples of positive behavior these behaviors may start to feel like past successes, memories of things already done well. After having invited them to describe their behavior in the desired future we can ask something like: "Are there things in that description of what you would like to do, that you can already can start doing?" Research suggests that it is likely that the answer will be 'yes'.