People change best by taking actions, one step at a time, and reflecting on and responding to the consequences of those actions so that an intelligible pattern eventually starts to form 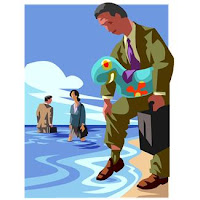 The conventional view on effective change: the plan and implement model

The conventional view on how people can achieve change best corresponds with what is call the 'plan-and-implement model'. This model says that you first have to analyze and reflect in order to be able to develop a clear picture of what you want to achieve and only then you can plan and take steps to realize this picture. This conventional change approach thus consists of the following four steps:
The solution-focused approach follows a test-and-learn model

The solution focused approach works from the assumption that effective change in complex systems corresponds with the so-called 'test-and learn model'.  This approach is based on the idea that learning is a circular and iterative process. The test-and-learn approach is quite different from the plan-and-implement model in several aspects. Researcher Herminia Ibarra, author of Working Identity: Unconventional Strategies for Reinventing Your Career, has found that the test-and-learn-model corresponds with how people make effective career transitions. She describes it as follows: “We take actions, one step at a time, and respond to the consequences of those actions such that an intelligible pattern eventually starts to form”. While the process unfolds knowledge grows about what works and what not. Also, the test and learn model is a dynamic approach in the sense that the goal is not a fixed picture but evolves as the process goes on. While the plan-and-implement model requires that you first know before you can act, the test and learn model turns this on its head; first you act, then you know.

Complex systems require a the test-and- learn approach to change
The solution-focused view on effective change resembles more the test-and-learn model than the plan-and-implement model. This does not mean the plan-and-implement model is regarded as useless. Rather, the question is: which change model do you use in which circumstances? My hypothesis is that the more complex a problem is, the less effective the conventional plan-and-implement model of change and the more appropriate the test-and-learn model will be (in Complex problems ask for the simplicity of the solution-focused approach you can read more about what is meant with complexity in this context). What is important here is to know that a conventional view on change holds that change happen in a linear way which means that the effect is expected to be proportionate to the intervention. It also assumes that change must be initiated and controlled in a top down fashion. A solution-focused view corresponds with a complexity perspective which says that change in a complex system happens in a non-linear way. This means that small events can ripple through the whole system and change may begin anywhere within the system.

Main advantages of small steps
Solution-focused practitioners generally focus on one small step forward instead of a big leap. Intuitively you may think that taking small steps may only be useful for situations in which you have small problems but this is not the case. On the contrary, when problems are large, taking small steps may be even more powerful. In fact, the solution-focused approach assumes that they are often the only way to start tackling problems that nearly overwhelm us. Why is this so? Here are four reasons: