Achieving success often depends on many factors like knowledge, experience, planning and organization, access to capital, technology, timing, and luck, and so forth. But nearly anything in life we would like to accomplish also critically depends on our conversation and communication skills. Ineffective conversation can be spoiler of success. When is conversation effective?

Effective conversation depends critically on 1) a focus on what you want to achieve and 2) sensitivity to the frame of mind of other people. This clear focus makes it possible to concentrate on what needs to change and on what that change should result in. In general, people appreciate the honesty and the clarity of focusing on the desired situation. Sensitivity to the frame of reference of the person you’re talking to is just as important. It enables you to communicate in subtle and respectful manner. In general, people find it very important to be taken seriously. When you take them seriously, it will be very likely that they will to the same to you. People have a strong tendency towards reciprocity; they tend to respond to a positive action with another positive action.


Framing the conversation challenge
The hard thing about these two demands, sensitivity and focus, is that they tend to exercise their power simultaneously throughout conversations. Intuitively we may find it hard to think of these two demands separately and we frame our situation in terms of the following continuum on which we try to find the optimal position in a given situation:

Framing your situation like this is likely to be ineffective because you have in effect created a tradeoff between sensitivity and results orientation. Going to one end of the scale will automatically create denial of the other side. Fortunately, there is an alternative, which is to frame the situation in terms of two independent demands, like this: 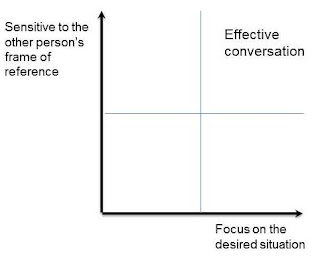 First acknowledge, then focus
A lot can be said about how this can be done but here I will try to be brief about it. A key to achieving effective conversation is to first respond to the other person and acknowledge his or her perspective. By doing this, the conversation becomes fluent. The other person will notice that you have listened to what he or she has said and that you take it seriously. Also, the other person will have a few extra seconds to think about what he or she has just said. This will give him or her the opportunity to check f what was said was right and perhaps to clarify it a bit. After you have acknowledged the other person's perspective it likely that he or she is ready to listen to what you have to say. This is the moment at which you can say or ask something that will help focus the attention of both of you to the desired situation, for instance by asking: "How will we notice, we're on the right track?".
Author: Coert Visser