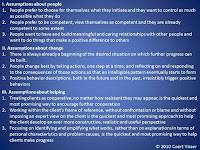 Solution-focused assumptions about people are optimistic. Solution-focused practitioners view people as autonomous and competent individuals with a desire to do good. They assume that people tend to follow the constructive path as soon as they see it. It is no coincidence that these assumptions about people resemble the universal basic needs of 1) autonomy, 2) competence, and 3) relatedness which have been identified in Self Determination Theory  (Deci &amp; Ryan, 2000). In an earlier article (Visser, 2010) I have argued that the solution-focused approach and Self Determination Theory  overlap in their view on people.

II.        Assumptions about change
1)        There is always already a beginning of the desired situation on which further progress can be built.
2)        People change best by taking actions, one step at a time, and reflecting on and responding to the consequences of those actions so that an intelligible pattern eventually starts to form
3)        Positive behavior descriptions, both in the future and in the past, irresistibly trigger positive behaviors

Solution-focused change holds the assumption that there is always fluctuation and change happening. This implies that there are always times at which problems are less severe and times at which beginnings of success have already been happening. Because of this there are always already some things going well which can be amplified to build progress in the desired direction. An assumption in solution-focused change is that one should not change more than necessary. Small steps are generally preferred to large steps. They require little energy and motivation and are usually generative of more change. The best way to generate ideas for steps forward is to elicit vivid pictures of positive behaviors. This can be done by asking people to describe desired future behaviors or by asking them about situations in which they have shown positive behaviors in the past. Once a vivid picture of positive behaviors has been created it will become very easy and attractive for people to start performing that behavior (Visser &amp; Schlundt Bodien, 2009).

Solution-focused change assumes that clients are not resistant to being helped but may resist against the approach taken because they feel it does not fit their situation. When client’s preferences and perceptions are taken very seriously they are most likely to open up more. Solution-focused practitioners will not confront their client but will keep on working with what their clients bring forward. They are very optimistic about the ability of clients to develop an ever more realistic perspective while conversations proceed. Solution-focused practitioners focus not so much on internal states or constructs within the client but instead on the way clients effectively interact with their environment. Solution-focused change’s assumptions about effective helping differ substantially from mainstream therapy’s and coaching’s assumptions. Instead of directly offering advice based on experience and scientific evidence, solution-focused change assumes that clients will benefit more from identifying solutions within their own experience.