Building a Bridge between the Better Past and a Better Future 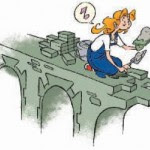