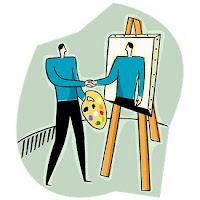 On BPS Research Digest is an interesting article on the power of visualization. (Thanks Jim Mortensen for pointing me to it). It explains there are two ways of visualizing yourself being successful at something: from a first-person perspective as in real-life, or from an external perspective, as an observer might see you. Researchers Lisa Libby and colleagues have demonstrated that it's this latter, third-person perspective that is far more effective in raising the likelihood we will go on to perform a desired behavior  "The researchers said these findings extend prior work showing that we tend to interpret other people's actions as saying something about them, whereas we interpret our own actions as saying more about the situation we're in. So, when we picture ourselves acting in the third-person, we see ourselves as an observer would, as the 'kind of person' who performs that behavior  "Seeing oneself as the type of person who would engage in a desired behavior increases the likelihood of engaging in that behavior", the researchers said."

One of the most important parts of the solution-focused approach is to help client create positive behavior descriptions, concrete visualizations of how they will act in the desired future. Evidence shows that once a positive behavior description is made the execution of that behavior will automatically be prepared. Previous research by Noelia Vasquez and Roger Buehler has also shown that using perspective changes in describing future success can be very helpful. This research by Lisa Libby and her team seems to confirm the motivational impact of making third person perspective positive behavior representations. For solution-focused practice, the relevance seems to be: invite clients to describe from a third person perspective how they will act in the desired future.